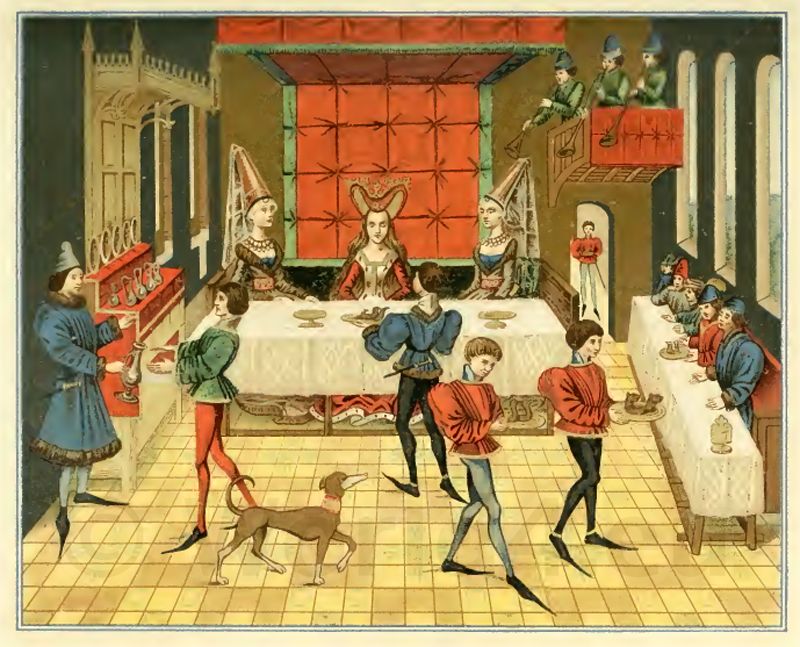 Étiquette de la cour médiévale. The lady of the castle.

Medieval court etiquette. The lady of the castle. 15th century.

The lady of the castle sits in the middle of two maids of honor. The ladies are dressed with a high Hennin with ruffles and veils, tight dress with a plunging neckline and the Surcot, trimmed with fur. The forehead is shaved in order to achieve a higher line. The Surcot (sleeve tunic of the Middle Ages, which in the later history, is used as a corset) worn by men and women has been equal.

The chatelaine is wearing a heart-shaped, horned Hennin. Right next table sit a few guests. They just sits on one long side of the table with their backs against the wall. To the left of the big table, there is a credence table on which the butler stands (Tresur). The pages are dressed in toed shoes, leggings and a short waistcoat. They carry of trumpets sound, whole poultry and game meat (roast swan and bear) on. They range across the golden bowl from above the table. Right on the table is a salt shaker.