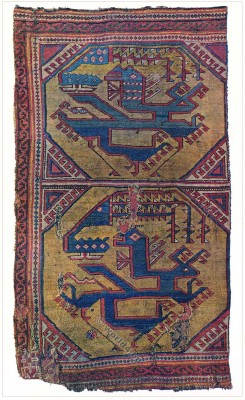 Carpet with conventionalized Animal-Figures from Asia Minor or the Caucasus, 15t century.

Carpet with conventionalized Animal-Figures: Incomplete Asia Minor or the Caucasus; First half of the 15th century. Length, 172 cm.; width, 90 cm.

Oriental carpet from first half of the 15th century.

The carpet comes from a church in Central Italy, and it was acquired in Rome, It was at first kept in the Kunstgewerbemuseum (Arts and Crafts Museum) at Berlin (86/603); in 1906 it was transferred to the Department of lslamic Art of the National-Museums at Berlin (Inventory No, 4).

Selvedges and end-webbings have not been preserved,

The inner field is divided into two approximately square spaces, not quite equal in size, converted into octagons by cutting off the corners, Each of these two octagons is filled with the same animal-group differing only in small details, on a yellow ground, In spite of the strong conventionalisation, the ancient Chinese motive of the struggle between the dragon and phoenix may be recognised in this group. The body of the writhing dragon is divided into angular blue spaces, bordered with red, In these, the four legs with red hook-shaped claws, the tail and the neck with its red and while book-formed hackles are rendered more in the style of flat ornament than of organic fidelity. A number of diagonal outgrowths, issuing from the body in straight or broken lines can only be interpreted as the flames associated with these dragon-representations, The geometrical rendering of the phoenix is carried still further. The bird is reduced to its simplest possible form; the body is transformed into a blue triangle, to one side of which are attached three tail feathers in red, white and blue, bent-over; at the other side is a slender neck and a hardly-recognisable head with foul eyes and a forked tongue. Each corner of the square contains counterchanged red and white hooks and a blue and red triangle.

The border, which is only preserved entire at the ends, has a middle band with strongly conventionalised half-palmettes growing from a continuous stern in red on a green ground. The inner and outer stripes each contain a row of small lozenges in different colors on a ground of varying shades, These stripes are edged by yellow and red lines.
Owing to the lack of one of the side-borders it cannot be determined with certainty whether there were onIy two square panels or whether the carpet was originally larger. Carpets of this type represented in pictures have two or more panels.
This carpet belongs to a group of Hither-Asian carpets with patterns consisting of more or less strongly conventionalised animals, in a tile-like arrangement of square panels, known from representations in Italian pictures of the 14th and 15th centuries. A carpet with a pattern similar to the one under consideration is to be seen in a fresco of the Marriage of the Foundlings painted by Domenico di Bartolo between 1440 and 1444 in the spedale della Scala at Siena; by this means a terminus ante quem for this special type of Hither Asian carpet is established. A larger carpet of this type with twelve squares appears to be represented on a marriage-coffer (cassone) in the Seminario Arcivescovile at Siena, ascribed by Schubring (Nr. 442, Plate C 1) to Giovanni di Paolo. The carpet “avec un motive de dragon” in a fresco of the Annunciation in S. Marco at Florence, referred to by Soulier (p. 201) as having the same motive as this carpet, really has no relevance. It would be more to the point to cite the carpets with almost entirely geometrical patterns hanging out of the windows in certain cassone~paintings; for example the cassone in the Yarves collection, New Haven (Schubring Nr. 140), and that in the Parry collection, Highnam (Schubring, Nr. 142).
A list of representations of such carpets in Italian pictures may be found in Bode and Kühnel (1922), pp. 36/37; it is supplemented by Gustave Soulier, “Les influences orientales dans la peinture Toscane” (Paris, 1924), part II, chapter II, “La représentation des Tapis”.

Source: Old oriental carpets, issued by the Austrian Museum for Art and Industry; with text by Friedrich Sarre and Hermann Trenkwald, translated by A.F. Kendrick.