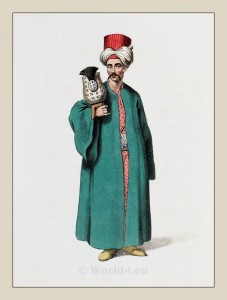 The Turban Bearer to the Grand Signior.

The Turban Bearer of the Turkish Sultan.

Turban bearer – Official responsible for the guarding of the Sultan’s turbans.

THIS officer holds a very conspicuous place in several of the grand processions of the Sultan, who has always two turbans carried before him. They are placed on a sort of tripod, and borne in the right hand by the two officers appointed for that purpose. Thls ceremony, which at first only originated for the purpose of giving the Sultan an opportunity of changing his turban, if he chose, has now become a matter of ostentation. And as the different officers of state and others pass them, they make a most profound reverence, while the Turban-Bearers take care to incline the turban a little to the right or left as they receive the homage. This is particularly the case, when a fresh Sultan comes to the throne, and goes to have his sabre girded on; a ceremony, which always takes place in the mosque of a little village called Youb, in the neighbourhood of the city. On the morning when it is performed, the streets from the seraglio to Youb are lined on both sides with Janissaries in their red shoes, large blue trousers, and bonnets, which they are then obliged to wear, but without arms. All the officers proceed on horseback, surrounded with attendants on foot, and the Janissary Aga by far exceeds the rest in splendour and magnificence.
These officers and the Janissaries mutually compliment each other while all pay the most humble respect to the Sultan’s turbans, which are very rich, and ornamented with feather’s.