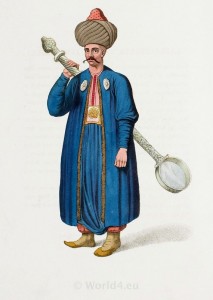 Laddle-Bearer. Cook of the Janissary corps.

This singular character is a person of greater consequence than his office, if we are to judge from European manners, would lead us to suspect. The sense of honour is not, as with us, attached to their colours; they might lose them without much danger of disgrace; but the loss of their ladle and kettle is almost irreparable, and they esteem it as their greatest calamity. In order to avoid this, every odah or regiment, of which there are an hundred an one, has two of each. When both are taken by an enemy, they consider the regiment as destroyed, and a new one is formed, to whom new ladles and kettles are given.
These ladles and kettles are never removed without receiving some military honors. When the Ladle-Bearer goes round, according to Mons. Dalvimart, to serve out the soup, or messes, he is always escorted by a guard. The Janissaries themselves, also, have a wooden spoon, with which they eat their pilaf, and which they wear in their caps instead of feathers; and they as much look upon these as a part of the military dress, as an European would a sword.