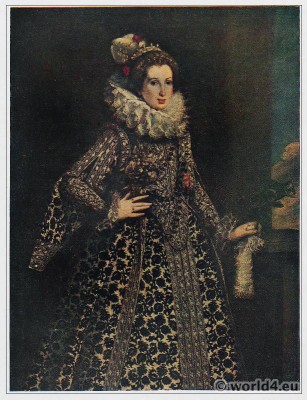 Portrait of a lady of the Pallavicini family. From the painting by Juan Pantoja de la Cruz 1553-1608. Elizabethan court dress. Queen Elizabeth Style of about 1530-1600 a special form of the so-called Tudor style (Renaissance costume period). Lavinia Biglia (Maid of honor of Spanish Queen Anne of Austria 1549-1580) was descended from the Milan branch of the ancient noble family of the Pallavicini. The Pallavicini are an ancient aristocratic family from Italy whose oldest line dates back to the 10th century. It was founded by originating from Germany Count Adalbert (Lineage adalbertino obertenga  which were also part of the Marquis of Massa, Corsica, Parodi, Lupis and Gavi.), whose wife, Adelhaid was related to the Roman emperors. Adalbert went to Italy, accompanied by the Emperor Otto II., Where he was settled in the valley of the Po, between Piacenza and Cremona in 981. The first Pallavicino fief was created by Oberto II, who received it from emperor Frederick Barbarossa in 1162. Albert the son of the Marquis Oberto I was called “Pelavicino” (perhaps not even joking nickname in reference to his rapacity). This nickname was hereinafter inherited by his descendants, becoming the surname of the family in the form Pallavicino (or Pallavicini). The grandson William, who died in 1217, was the progenitor of all the notes of the branch so-called ‘Lombardo’, which emerged from grandchildren Oberto II,. The Pallavicini family spread as time goes on, and reached Bavaria, Austria (Czech Republic) and Hungary.