Jane Seymour (b. c. 1509; † October 24, 1537 at Hampton Court Palace, London) was the third of the six wives of England’s King Henry VIII. Since she was never officially crowned, she was officially only Royal Consort of England and Ireland for the 17 months of her marriage. Although she did not wield as much influence as her predecessors Catherine of Aragon and Anne Boleyn, as a devout Catholic she was the great hope of the conservative party at court to stem the Reformation and rehabilitate Princess Mary. She also tried to advocate for the Pilgrimage of Grace rebels. She was the mother of Henry VIII’s only male heir to the throne – later King Edward VI – and died of childbed fever after his birth.

THE history of a young woman suddenly elevated from a private station to a throne from which she was snatched by a premature death when she had graced it for little more than a single year cannot reasonably be expected to contain many circumstances worthy of notice. Wife of one King, and mother of another, we find little else remarkable in the life of Jane Seymour, except that she became the accidental and inactive instrument of raising her family, already of great antiquity, to the highest degree of rank and power that could be conferred on subjects.

She was the eldest of the four daughters of Sir John Seymour, of Wolfe Hall, in Wiltshire, Knight, Groom of the Chamber to Henry the Eighth, and Governor of the Castle of Bristol, by Margaret, daughter of Sir Thomas Wentworth, of Nettlestead, in Suffolk. Her connections and accomplishments procured for her the office of a Maid of Honour to Anne Boleyn, and her beauty made her the innocent cause of her mistress’s ruin.

Henry conceived a sudden passion for her, and became disgusted with Anne. Equally a stranger to sensibility and to morals, his attachment to her soon became irresistible, and his aversion to the Queen increased to a degree of dislike little short of hatred.

He determined to make Jane his wife: and the gratification of his desire was easy to one who was above the ties of law, and to whom those of conscience were unknown. The unhappy Anne was accused of adultery, and put to death, and the unfeeling widower, on the very day, or, according to some, on the third day, after her execution, profaned the altar by pledging his vows to Jane Seymour.

This union, according to all our historians, took place in the last week of May, 1536; and on the eighth of the following month the parliament passed an act to settle the Crown on its issue, either male or female, in exclusion of the Princess Mary and Elizabeth.

The issue of Jane, at least was first named; but, such was the abject submission of that body to Henry’s pleasure, that the same act in the conclusion gave him full power to name whomsoever he might think fit for his successor.

About fifteen months after her marriage Queen Jane, was delivered of a son, the admirable Edward the sixth. The variance and confusion of historical reports as to the date of the birth of that Prince are very strange. All agree that it happened in 1537 ; but Hayward fixes it to the seventeenth of October, Sanders to the tenth, and most others, rightly, as we shall see presently, to the twelfth of that month. The following letter from the Harleian Collection, which was doubtless circular, to Sheriffs of Counties, &c. would furnish, if it were wanted, an additional authority for the last of these dates, as it may be reasonably presumed to have been written as soon as possible after the birth of the child.

“Trustie and welbeloved, we grete you well; and, forasmuche as by the inestimable goodnes and grace of Almighty God we be delivered and brought in childbed of a Prince, conceived in most lawfull matrimonie between my Lord the King’s Majestic and us; doubtinge not but, for the love and affection which ye beare unto us, and to the commonwealth of this real me, the knowledge thereof should be joyous and glad tydeings unto you, we have thought good to certifie you of the same, to th’intent you might not onely render unto God condigne thanks and praise for soe greate a benefit but alsoe pray for the longe continuance and preservac~on of the same here in this life, to the honour of God, joy and pleasure of my Lord the Kinge and us, and the universall weale, quiett, and tranquillitie of this hole realm.

Given under our Signet, att my Lord’s Mannor of Hampton Court, the xii.th day of October.”
To our trustie and welbeloved
George Boothe, Esquier.

The joy excited by this event was soon abated by the death of the Queen. It has been said that it was found necessary to bring the infant into the world by that terrible method called the Csesarian operation; and Sir John Hayward, who in composing his life of Edward the Sixth undoubtedly sought the truth with all possible industry, positively states the fact.

Other writers, but I know not on what ground, have treated that report as an idle tale,invented by the papists, in malice to Henry. Itistrue that Sanders, one of the most bitter writers on that side, tells us that the physicians were of opinion that either the mother or the child must perish ; that they put the question to the king, which should be spared, the Queen or his son? and that he answered, his son, because he could easily find other wives.

The latter part of this reply has certainly very much the air of a malicious invention, for Henry, amidst all his crimes, was an accomplished gentleman ; but whether the anecdote be true or false, it does not clear up the point inquestion. A very short report to the Privy Council of the birth of the Prince, by her physicians, is extant, in which they state that the Queen had been happily delivered, and it has been argued there from that the birth could not have been attended by any peculiarly melancholy circumstance; but the word be more referred to “happily” may perhaps properly the production of a living child, a first born son, and heir to the Crown, than to the state of the mother.

Whatsoever may tend to correctness as to such a fact cannot, historically speaking, be deemed insignificant; I trust therefore to be excused for having been somewhat minute on a disagreeable subject.

The date of the Queen’s death, as well as that of the birth of the Prince, has been variously stated. Most of our historians fix it to the fourteenth of October, following probably Lord Herbert, who says that she was delivered on the twelfth, and departed two days after; but the official record in the College of Arms of the ceremonies of her funeral informs us clearly on both points; for the title, or preamble, of it is in these words “An ordre taken and made for the enterrement of the most high, most excellent, and most Chrysten Pryncess, Jane, Quene of England and of Fraunce, Lady of Ireland, and mother to the most noble and puyssant Prince Edward; which deceasyd at Hampton Courte, the xxxix.th yere of the reigne of our most dread Soveraigne Lord Kyng Henry the eight, her most dearest husband the xxiiii.th day of Octobre, beyng Wedynsday, at nyght, xii of the clock; which departyng was the twelf day after the byrthe of the said Prynce, her Grace beying in childbed. Whose departyng was as hevy as hath ben hard of many a yere heretofore, for she was a very gracious Lady, havyng the love of all people.”

Note:  Prince Rupert, Count Palatine of the Rhine and Duke of Bavaria.

This document, which is of great length, informs us that she was buried at Windsor with the utmost pomp. Among much curious information, it discloses two very remarkable facts that all the various devout services which were performed daily for near a month before the funeral, as well as on the day itself, were strictly after the order of the Romish ritual; and that the lately degraded and disinherited Princess Mary officiated as chief mourner.

Source: Portraits of illustrious personages of Great Britain: engraved from authentic pictures in the galleries of the nobility and the public collections of the country : with biographical and historical memoirs of their lives and actions by Edmund Lodge (1756-1839). London: Harding and Lepard, 1835. 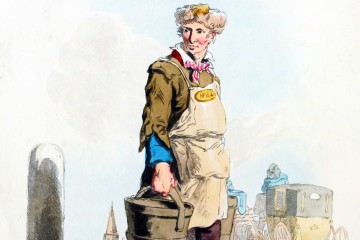 View of a waterman to a coach stand, carrying two pails of water.

At every stand for hackney-coaches in the metropolis, there is one or more persons termed watermen, whose occupation is to… 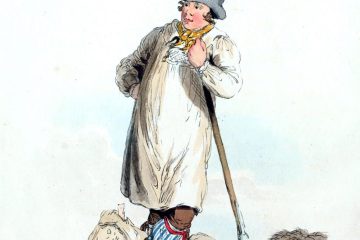 The usual dress of the farmers’ servants in the southern parts of England.

England 1813. These laborers are, in general, a hardy, robust class of men, and furnish the best soldiers in our… 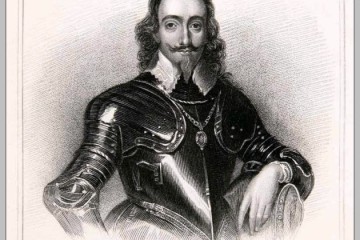 Portrait of King Charles the First 1648. 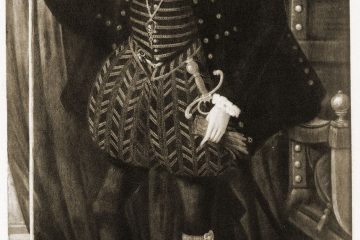 The early history of the Herbert family. William Herbert, 1st Earl of Pembroke. Full length, standing, in black-slashed doublet and… 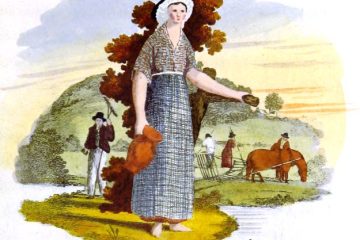 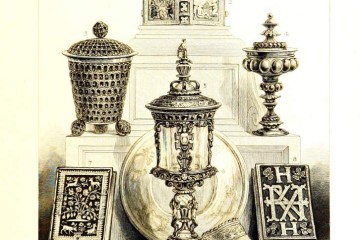 Relics associated with Queen Elisabeth. The Golden Prayer-book of Queen Elizabeth. Cup set with Amethysts and Turquois. Book of Meditations…