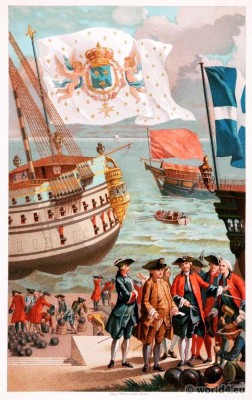 The Galley Flag. The Flag of the Merchant Navy.

The Royal Flag of France.

The Galley Flag. The Flag of the Merchant Navy.

The royal flag was, in reality, the national flag in the 18th century. Each regiment had its special flag; the royal navy alone had one flag, which was hoisted everywhere.

Poop view of a man-of-war of the first-class flying the royal flag ( white, with arms of France).

Galley flying the flag of the galleys of France.

Poop of a ship flying the flag of the French merchant-vessels (blue, with a white cross).

The illustrations are taken from the Pont Neuf or Toulon Arsenal, seen from the camp of artillery, painted by Joseph Vernet; the three principal figures in the front group are the engineer André, who may recognized by the rule which he holds under his arm, and two brothers La Rose, the navy designers.