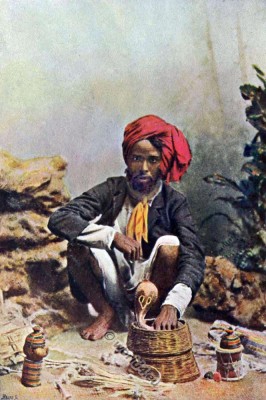 Although the so-called” snake-charmer” is usually a sharp-witted and ofttimes a clever fellow, it is his conjuring which forms his chief claim to attention. True, he carries a hideous cobra, and performs sundry antics with the reptile, generally winding up by going round for contributions to his treasury with the snake around his neck. But everybody knows that the poisonous fangs have been extracted, and the snake-charming show is usually neither entertaining nor original.

It is when he brings forth from an old and dirty sack the little implements with which he deceives the eye of the beholder, that an exhibition of his skill may be looked for. For he has none of the accessories of the European professor of legerdemain – no table, and no convenient pockets in the tail of a voluminous dress coat-very frequently indeed he has no coat at all. Many of the tricks performed by these itinerant wanderers would do credit to a first-rate professional conjurer at home, and, although some of them may be learned on payment of a small fee, there are others of which Europeans have never been able to learn the secret. The “basket trick” is a very clever one, and certainly appears to contain an element of the marvelous. A large basket is inverted, and under this is placed a boy. The performer then plunges a sword through the basket, while at the same time piercing shrieks are heard. After a few moments the boy appears running up from a distance, and upon the basket being overturned, nothing is found beneath it.

Another very common and equally clever trick is that of producing a mango plant, often as much as two feet high, from a mango-stone. But one of the most astonishing tricks ever witnessed by the writer, was that recently performed by a Hindu in Lucknow. He had been through all the old well-worn business, and was asked if he had a trick to show that was really good-something that was also new. He had. This trick, he said, was one for which the Sahib would reward him, he was inclined to think, to the extent of at least five rupees. He proceeded to place three small marbles of wood beneath three little cups of the same material arranged in a row. Then he removed the two outer cups, and under the centre one were the three marbles. So far there was nothing at all out of the common, as he was informed in no measured tone. He replaced the cup over the marbles and asked a lady present to raise it. Imagine the surprise of all present, when, upon the cup being lifted, a number of tiny little birds hopped in all directions from beneath it. The most curious part of this exceedingly clever trick lay in the fact that it was afterwards found impossible to cover even two of the birds with the cup from which they had been liberated.