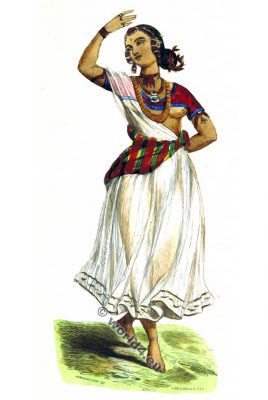 Bayaderes (from Portuguese bailadeira) were Indian dancers, as Devadasi (God Servants) church services or as dancers, even at secular events occurred. Their shawls were also called Bayadere. As ‘easy girls’ are Bayaderes a favorite theme of Rococo painting of the 18th and 19th centuries.
A female singer which occurs in Paris at the beginning of the 20th century as a Bayadere, is name giver of the operetta The Bayadere by Emmerich Kálmán.