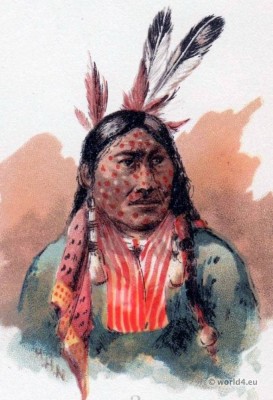 THE MIDĒ´WIWIN OR “ The Grand Medicine Society ”  OF  THE OJIBWA. BY W.J.HOFFMAN. (brief introduction)

Printed in 1891 by the Government Printing Office, Washington under the direction of J. W. Powell. Bureau Of Ethnology.

The Ojibwa is one of the largest tribes of the United States, and it is scattered over a considerable area, from the Province of Ontario, on the east, to the Red River of the North, on the west, and from Manitoba southward through the States of Minnesota, Wisconsin, and Michigan. This tribe is, strictly speaking, a timber people, and in its westward migration or dispersion has never passed beyond the limit of the timber growth which so remarkably divides the State of Minnesota into two parts possessing distinct physical features. The western portion of this State is a gently undulating prairie which sweeps away to the Rocky Mountains, while the eastern portion is heavily timbered. 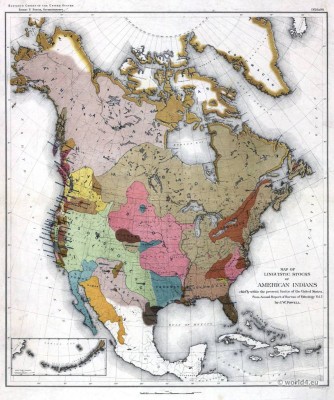 The present distribution of the Ojibwa in Minnesota and Wisconsin is indicated upon the accompanying map. In the southern portion many of these people have adopted civilized pursuits, but throughout the northern and northwestern part many bands continue to adhere to their primitive methods and are commonly designated “wild Indians.” The habitations of many of the latter are rude and primitive. The bands on the northeast shore of Red Lake, as well as a few others farther east, have occupied these isolated sites for an uninterrupted period of about three centuries, as is affirmed by the chief men of the several villages and corroborated by other traditional evidence. 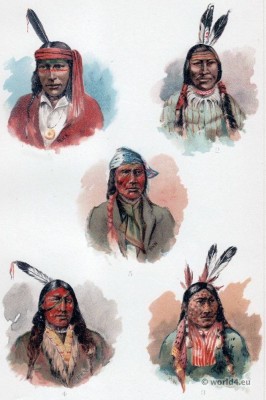 According to Sikas´sigĕ, the above account of the initiation of the Otter, by Mi´nabo´zho, was adopted as the course of initiation by the Midē´ priests of the Mille Lacs Society, when he himself received the first degree, 1830. At that time a specific method of facial decoration was pursued by the priests of the respective degrees, each adopting that pertaining to the highest degree to which he was entitled, viz: 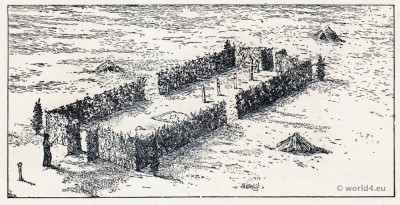 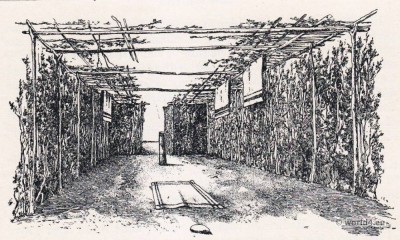 The Midē´wigân, i.e., Midē´wig´iwam, or, as it is generally designated “Grand Medicine Lodge,” is usually built in an open grove or clearing; it is a structure measuring about 80 feet in length by 20 in width, extending east and west with the main entrance toward that point of the compass at which the sun rises. The walls consist of poles and saplings from 8 to 10 feet high, firmly planted in the ground, wattled with short branches and twigs with leaves. In the east and west walls are left open spaces, each about 4 feet wide, 188 used as entrances to the inclosure. From each side of the opening the wall-like structure extends at right angles to the end wall, appearing like a short hallway leading to the inclosure, and resembles double doors opened outward. Saplings thrown across the top of the structure serve as rafters, upon which are laid branches with leaves, and pieces of bark, to sufficiently shade the occupants from the rays of the sun. Several saplings extend across the inclosure near the top, while a few are attached to these so as to extend longitudinally, from either side of which presents of blankets, etc., may be suspended. About 10 feet from the main entrance a large flattened stone, measuring more than a foot in diameter, is placed upon the ground. This is used when subjecting to treatment a patient; and at a corresponding distance from the western door is planted the sacred Midē´ post of cedar, that for the first degree being about 7 feet in height and 6 or 8 inches in diameter. It is painted red, with a band of green 4 inches wide around the top. Upon the post is fixed the stuffed body of an owl. Upon that part of the floor midway between the stone and the Midē´ post is spread a blanket, upon which the gifts and presents to the society are afterward deposited. A short distance from each of the outer angles of the structure are planted cedar or pine trees, each about 10 feet in height. About a hundred yards east of the main entrance is constructed a wig´iwam or sweat lodge, to be used by the candidate, both to take his vapor baths and to receive final instructions from his preceptor.
This wig´iwam is dome-shaped measures about 10 feet in diameter and 6 feet high in the middle, with an opening at the top which can be readily covered with a piece of bark. The framework of the structure consists of saplings stuck into the ground, the tops being bent over to meet others from the opposite side. Other thin saplings are then lashed horizontally to the upright ones so as to appear like hoops, decreasing in size as the summit is reached. They are secured by using strands of basswood bark. The whole is then covered with pieces of birchbark—frequently the bark of the pine is used—leaving a narrow opening on the side facing the Midē´wigân, which may be closed with an adjustable flap of bark or blankets.
The space between the Midē´wigân and the sweat lodge must be kept clear of other temporary shelters, which might be placed there by some of the numerous visitors attending the ceremonies. 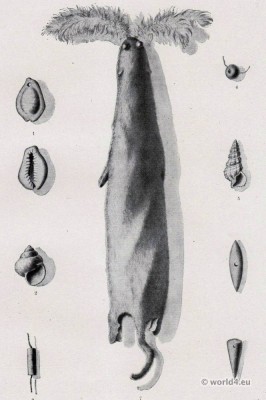 The Midē´ sack is made of the skin of a mink—Putorius vison, Gapp. White, downy feathers are secured to the nose, as an additional ornament. In this sack are carried the sacred objects belonging to its owner, such as colors for facial ornamentation, and the magic red powder employed in the preparation of hunters´ songs; effigies and other contrivances to prove to the incredulous the genuineness of the Midē´ pretensions, sacred songs, amulets, and other small man´idōs—abnormal productions to which they attach supernatural properties—invitation sticks, etc. 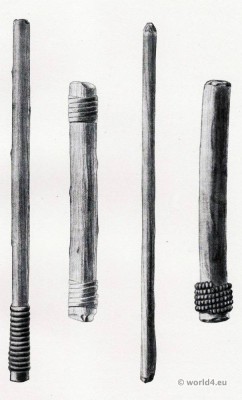 When the time of ceremony of initiation approaches, the chief Midē´ priest sends out a courier to deliver to each member an invitation to attend, while the candidate removes his wig´iwam to the vicinity of the place where the Midē´wigân has been erected. On the fifth day before the celebration he visits the sweat-lodge, where he takes his first vapor bath, followed on the next by another; on the following day he takes the third bath, after which his preceptor visits him. After making an offering to Ki´tshi Man´iō the priest sings a song, of which the characters are reproduced.

Diagram of Midē´wigân of the third degree. 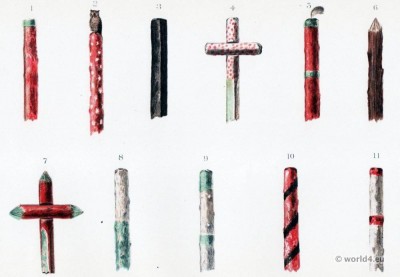 The structure in which the third degree of the Midē´wiwin is conferred resembles that of the two preceding. In this degree three posts are erected, the first one resembling that of the first degree, being painted red with a band of green around the top. (No. 1.) This is planted a short distance to the east of the middle of the floor. The second post is also painted red, but has scattered over its entire surface spots of white clay, each of about the size of a silver quarter of a dollar, symbolical of the mī´gis shell. Upon the top of this post is placed the stuffed body of an owl—Kŏ-kó-kŏ-ō´. (No. 2.) This post is planted a short distance west of the first one and about midway between it and the third, which last is erected within about 6 or 8 feet from the western door, and is painted black. (No. 3.) The sacred stone against which patients are placed, and which has the alleged virtue of removing or expelling the demons that cause disease, is placed upon the ground at the usual spot near the eastern entrance (No. 1). The Makwá Man´idō—bear spirit—is the tutelary guardian of this degree. Cedar trees are planted at each of the outer angles of the structure (Nos. 6, 7, 8, 9). The sudatory is erected about 100 yards due east of the main entrance of the Midē´wigân, and is of the same size and for the same purpose as that for the second degree. 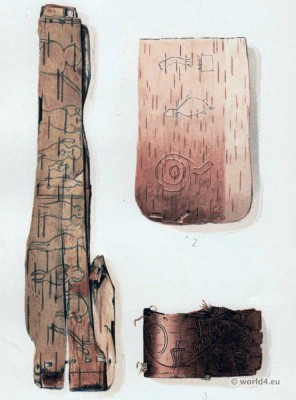 Before concluding, it may be of interest to refer in some detail to several subjects mentioned in the preceding pages. The mnemonic songs are in nearly every instance incised upon birch bark by means of a sharp-pointed piece of bone or a nail. The inner surface of the bark is generally selected because it is softer than the reverse. Bark for such purposes is peeled from the trunk during the spring months. On the right hand upper corner of Pl. XIX is reproduced a portion 287 of a mnemonic song showing characters as thus drawn. The specimen was obtained at White Earth, and the entire song is presented on Pl. XVI, C. A piece of bark obtained at Red Lake, and known to have been incised more than seventy years ago, is shown on the right lower corner of Pl. XIX. The drawings are upon the outer surface and are remarkably deep and distinct. The left hand specimen is from the last named locality, and of the same period, and presents pictographs drawn upon the inner surface. 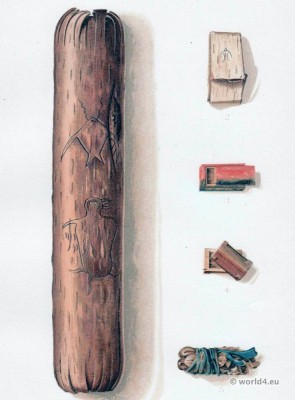 On Pl. XX are presented illustrations of several articles found in a Midē´ sack which had been delivered to the Catholic priest at Red Lake over seventy years ago, when the owner professed Christianity and forever renounced (at least verbally) his pagan profession. The information given below was obtained from Midē´ priests at the above locality. They are possessed of like articles, being members of the same society to which the late owners of the relics belonged. The first is a birch-bark roll, the ends of which were slit into short strips, so as to curl in toward the middle to prevent the escaping of the contents. The upper figure is that of the Thunder god, with waving lines extending forward from the eyes, denoting the power of peering into futurity. This character has suggested to several Midē´ priests that the owner might have been a Midē´-Jĕs´sakkīd´. This belief is supported by the actual practice pursued by this class of priests when marking their personal effects. The lower figure is that of a buffalo, as is apparent from the presence of the hump. Curiously enough both eyes are drawn upon one side of the head, a practice not often followed by Indian artists.
The upper of the four small figures is a small package, folded, consisting of the inner sheet of birch-bark and resembling paper both in consistence and color. Upon the upper fold is the outline of the Thunder bird. The next two objects represent small boxes made of pine wood, painted or stained red and black. They were empty when received, but were no doubt used to hold sacred objects. The lowest figure of the four consists of a bundle of three small bags of cotton wrapped with a strip of blue cloth. The bags contain, respectively, love powder, hunter’s medicine—in this instance red ocher and powdered arbor vitæ leaves—and another powder of a brownish color, with which is mixed a small quantity of ground medicinal plants.
The roll of birch-bark containing these relics inclosed also the skin of a small rodent (Spermophilus sp.?) but in a torn and moth-eaten condition. This was used by the owner for purposes unknown to those who were consulted upon the subject. It is frequently, if not generally, impossible to ascertain the use of most of the fetiches and other sacred objects contained in Midē´ sacks of unknown ownership, as each priest adopts his own line of practice, based upon a variety of reasons, chiefly the nature of his fasting dreams.