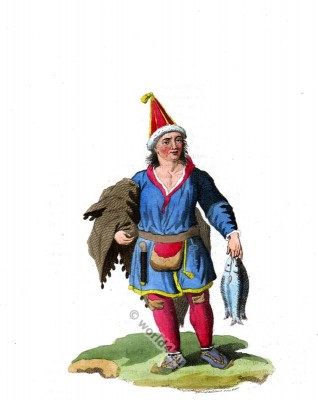 A Laplander in traditional folk dress.

THE Laplanders are of the middling stature; the greater part have flat faces, sunk cheeks, dark grey eyes, thin beard, straight brown hair, and a yellowish brown complexion, occasioned by the air, the smoke, and their want of cleanliness. Their mode of life renders them robust and active; they are, nevertheless, addicted to idleness. Their understanding is of the common cast: in general they are peaceable, submissive to their superiors, honest, sincere, and lively in society; but suspicious, deceitful in their traffick, and proud of their country and constitution.
In their dress they use no kind of linen. The men wear close breeches, reaching down to their shoes, which arc made of untanned leather, pointed, and turned up at the toes. Their doublets fit close, and arc open at the breast: over them is worn a close coat with tight sleeves, and. skirts descending to the knees: it is fastened to the body by a leather girdle, ornamented with plates of tin or brass. To this girdle they hang their knives: their instruments for lighting a fire, and also their pipes, &c. Their clothes are of skin, leather, or cloth: the doublet, whether of cloth or leather, is always trimmed with fur, or strips of cloth of different colours. Their caps are bordered with fur: the greater part of the Russian Laplanders make use of the skins of rats for these borders. The caps are pointed at the top, and ornamented at the four seams with strips of cloth, of a different colour to the caps themselves.
Besides hunting, fishing, and attending the rein deer, the men employ themselves in building their canoes, which are small, light, and compact, in constructing sledges, similar in form to the canoes, and in attending to the concerns of the kitchen, in which the Lapland women take no part what-ever.
The Laplanders bury their dead without coffins; in some cantons with their clothes on, and in others entirely naked. The Pagan Laplanders inter their most celebrated huntsmen near the spots consecrated to the sacrifices. They generally place a sledge reversed over the grave, and leave food and household furniture with the body of the deceased: a custom which the baptised Laplanders practise, in secret, to this day. The richer sort give a repast to the bearers and attendants; but the greater part do not observe this custom.