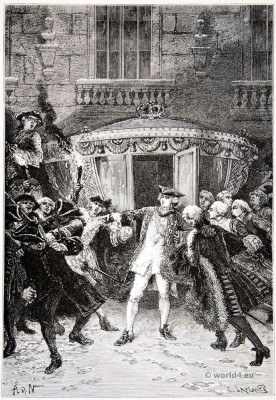 As at January 5, 1757 King Louis XIV. ascended to his car, Robert-François Damiens (1715-1757)  rushed up to him and stabbed with a knife on him, which he only inflicted him a slight wound. The king ordered that one should guard Damien and not kill. Damiens not try to escape and was immediately overwhelmed. He was imprisoned at the Conciergerie and kept strapped after a failed suicide attempt.

He is one of the last convicts were executed with the traditional cruel punishment for Kingslayer (quartering). Giacomo Casanova was in the audience of the execution and goes in his memoirs “Histoire de ma vie” short on them. Executive headsman was Nicolas-Charles-Gabriel Sanson, assisted by his nephew Charles-Henri Sanson, whose first execution this was. He was tortured with red-hot pincers. Liquid wax, pitch, lead, sulfur and boiling oil was poured in its deep wounds. Six horses were needed to execute him, which was achieved only after severing the arm and leg tendons by Sanson. It was one of the cruelest executions of the modern era and the last of its kind in France – complicated by the fact that they were no murder, but rather it was an attempt by the killing. As a result, various conspiracy theories were spreading, behind Damiens’ deed stuck in truth a conspiracy of the Jesuits. These rumors contributed to the fact that the Order was banned in France in 1764.