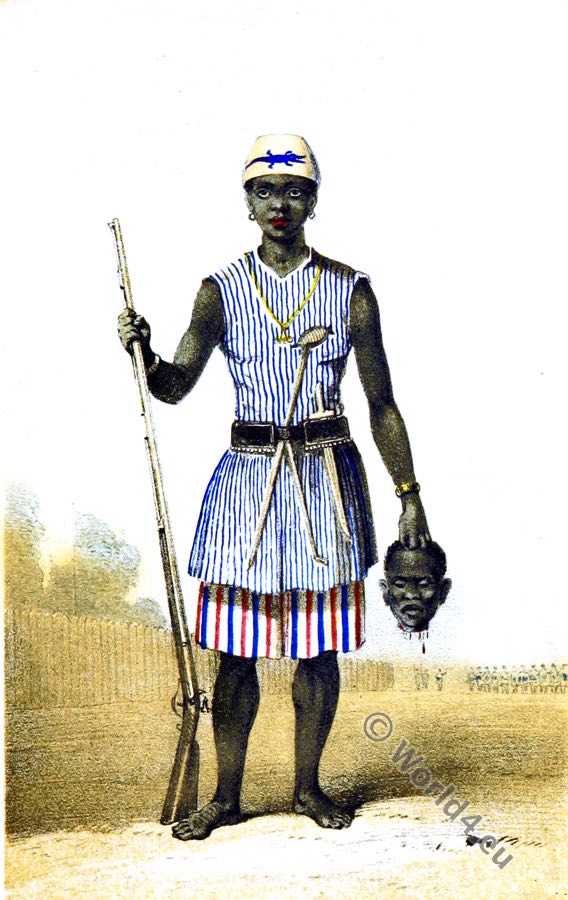 From the 17th to the late 19th century Dahomey had women regiments in the army.

Dahomey or Dahomey was a West African kingdom that existed about 260 years on the coast of the Bight of Benin. The Kingdom of Dahomey was founded in the 17th century and lasted until the late 19th century. It was conquered by French troops from Senegal and later became part of French West Africa. Economic benefiting the kings of Dahomey from the slave trade on the coasts.

From the book: In war, the miegan’s soldiers are joined by the miegan’s amazons, and thus form the right or advanced battalion. The amazons are not supposed to marry, and, by their own statement, they have changed their sex. “We are men,” say they, “not women.” All dress alike, diet alike, and male and female emulate each other: what the males do, the amazons will endeavour to surpass. They all take great care of their arms, polish the barrels, and, except when on duty, keep them in covers. There is no duty at the palace, except when the king is in public, and then a guard of amazons protect the royal person, and, on review, he is guarded by the males; but outside the palace is always a strong detachment of males ready for service.

The amazons are in barracks within the palace enclosure, and under the care of the eunuchs and the camboodee or treasurer. In every action (with males and females), there is some reference to cutting off heads. In their dances— and it is the duty of the soldier and the amazon to be a proficient dancer— with eyes dilated, the right hand is working in a sawlike manner for some time, as if in the act of cutting round the neck, when both hands are used, and a twist is supposed to finish the bloody deed.

Source: Dahomey and the Dahomans: being the journals of two missions to the King of Dahomey, and residence at his capital in the years 1849 and 1850 by Frederick E. Forbes. London 1851.