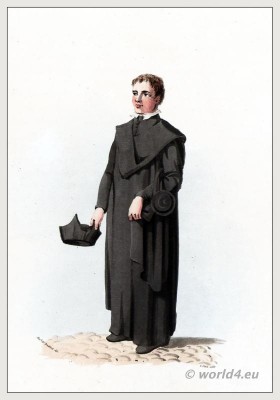 STUDENT OF THE IRISH COLLEGE, SALAMANCA.

STUDENT OF THE IRISH COLLEGE, SALAMANCA.

THE Students of the Irish College arc distinguished from the others of the university, by the habit represented in the sketch, which is composed of a coarse cloth gown, and cap. (The usual academical dress in Salamanca, is a black cloak and cocked hat, except in the Collegios Mayores, where it resembles that of the Irish Student, though of different colours.)

This seminary was instituted by King Philip the Second, and endowed with a liberal revenue chargeable on the crown, which provides for the establishment of a rector, and the maintenance and education of sixteen Students.

These young men are appointed by the Roman Catholic Bishops of Ireland, and after a term of seven years, which is devoted to their studies, they are sent for by the diocesans to assume the duties of the priesthood. An academical degree is not considered an indispensible qualification; although those of bachelor, licentiate, and doctor, may be acquired during their residence. A part of the magnificent convent of the Jesuits, after their expulsion, was appropriated to the use of the Irish College, by the late King Charles the Third.