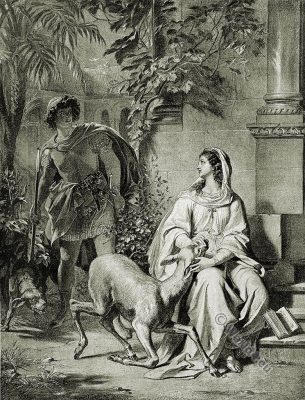 The Bride of Messina by Friedrich Schiller. 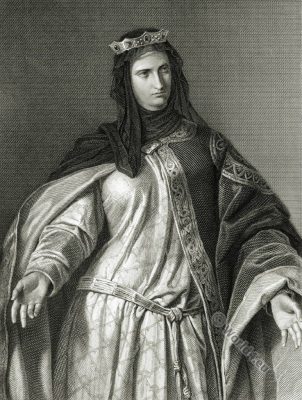 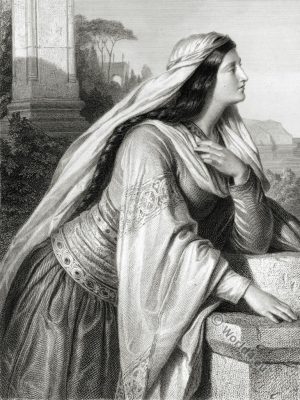 DON MANUEL and Don Casar are the sons of Isabella, the Princess of Messina. Their sister Beatrice is believed to be dead, but in reality bad been placed by her mother in a convent, where she is discovered in time by her two brothers, who, ignorant of the relationship, fall in love with her. Our picture shows the first meeting between Don Manuel and Beatrice.

“Already had the chase worn down the day
Among the echoing woodlands, when it hap’d
The hot pursual of a milk-white bind
Drew me far distant from your troop, and down
The widening dell the affrighted quarry flew
O’er bush, and cliff, and pathless rock, and stone.
Ever a spear’s throw was it still before me,
Yet ever baffling my uncertain aim,
Until at length before a garden wicket
It vanished-swift I voulted from my horse
And rushed toward the spot with spear uplift,
When with surprise I saw the affrighted beast
Laid trembling at a fair nun’s gentle foot
Whose delicate hand soothed il caressingly-
Moveless I gazed upon the beauteous wonder,
The javelin in my grasp in act to fly-
But she raised up her full dark eyes upon me
Beseechingly-we stood in mutual silence.”

The Bride of Messina or the enemy brothers is a drama by Friedrich Schiller, which the author has given the genre identification “A tragedy with choirs”. The premiere took place in Weimar on 19 March 1803. Following the negative reactions to the premiere it was compared with the other Schiller dramas found long to be inferior and placed in the background. Even today it is one of the lesser known dramas of Schiller. Schiller tried to connect the ancient with the modern theater in the Bride of Messina. The substance of the piece is in the tradition of the great Greek tragedy of Euripides or Sophocles. Like its ancient models ending the drama with the downfall of the whole race. As scene of action selected Schiller Sicily, a place where meet up new and ancient times, Christianity and Paganism.