Frances Carr, born Howard, ( Frances Devereux, countess of Essex; Frances Carr, countess of Somerset 1590-1632) was an English noblewoman involved during the reign of James I of England in a famous scandal. The procedure for cancellation her marriage to Robert Devereux, 3rd Earl of Essex with the aim of Robert Carr, to marry the 1st Earl of Somerset, caused a public scandal after it became clear that she was responsible for a murder in connection with her marriage to the Earl of Somerset.

This sparked one of the greatest scandals of England in the Stuart time. Because James I pardoned her, she escaped the execution.

She was a daughter of Thomas Howard, 1st Earl of Suffolk and his second wife Katherine Knyvett. She was married in 1606 to Robert Devereux, 3rd Earl of Essex. The marriage had political backgrounds. Although the Howard family continued to show Catholic tendencies, they were found again in the king’s surroundings.

The Howards had been rivals of the father of groom Robert Devereux, 2nd Earl of Essex. The marriage should eliminate the contradiction. In some representations it is indicated that James I had been significantly involved in the marriage project. In the presence of the king the wedding was splendidly celebrated in the Palace of Whitehall. Due to the young age of the two spouses, the marriage was postponed by three years. Robert Devereux, 3rd Earl of Essex went on his cavalier tour to Europe. His wife spent her time with her mother or at the royal court.

Note:  A Dinner at the House of Molière at Auteuil.

After returning from his cavalier trip, Essex was unable to commit the marriage for psychological or physical reasons. Around 1611/1612 Frances Howard entered into a relationship with Robert Carr, who was a favourite of the king. Perhaps her family supported this step to strengthen her influence on the king.

The annulment of the marriage became a public scandal. The decision was entrusted to a special commission of the Anglican Church. It came to the conclusion that Essex had not had any problems with other women, but in the case of Frances Howard he had been incapable of consummating the marriage. Although this diagnosis only damaged Essex’s reputation relatively slightly, it raised the question of the causes. The blame was attributed to Frances Howard. She would have cheated on Essex and refused. Only with a trick she could have faked the investigation of her virginity. Corresponding satirical verses circulated.

Three months later, Frances Howard married Robert Carr. He was proclaimed Earl of Somerset and the wedding was celebrated in a magnificent ceremony at the royal court. About two years later, in 1615, Sir Gervase Elwes, responsible for the prison in the Tower of London, claimed that Thomas Overbury was murdered by poison. Overbury had died ten days after the annulment of the marriage between Frances Howard and Essex had been announced. Until Elwes testified, a natural cause of death was assumed.

The direct perpetrator was the prison guard in charge. He accused Frances Howard as the instigator. Overbury had been a confidant of Carr and had even encouraged his initial approach to Frances Howard. However, he rejected any further relationship between the two. Carr and Frances Howard saw Overbury as a threat to their marriage plans and related political goals. Carr then arrested Overbury. Frances, along with some accomplices, took care of his poisoning in prison.

During the trial against her accomplices, her guilt was established. The disclosure of their perpetration triggered a major public scandal. She was reviled in public as a witch or a whore. Since October 1615 she was imprisoned herself. Together with her husband she was accused. Before the trial began, she confessed and pleaded guilty. The king was able to save her from execution by referring to her confession of guilt and her remorse. Her husband declared himself innocent, was found guilty by the court. But he was not executed either. The accomplices had been executed.

The couple remained imprisoned in the Tower until 1622. After the release she lived withdrawn. Return to the court they were not allowed. 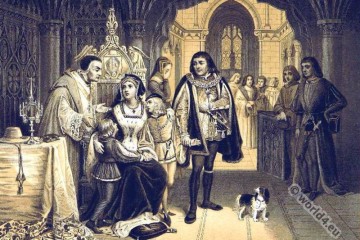 Richard III was from 1483 until his death at the Battle of Bosworth King of England. He was the last… 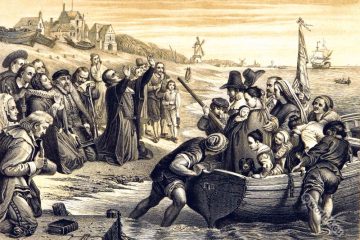 The departure of the Mayflower, July 1620.

The Mayflower was a sailing vessel, with the so-called Pilgrim Fathers, many of whom were from central England, set out… 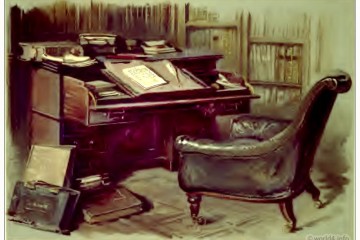 THE desk so long used by Sir Walter, and "his own huge elbow chair," are familiar to all who have… 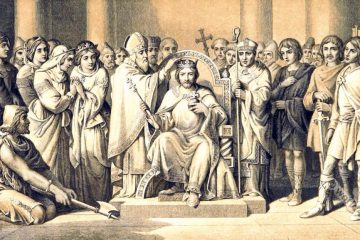 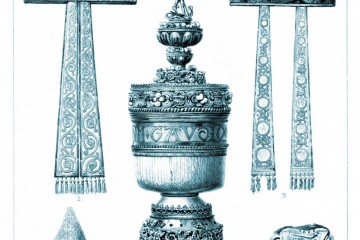 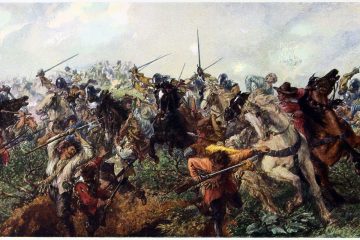