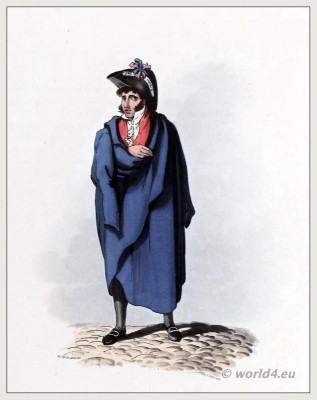 THIS sketch represents a Gentleman in the ordinary Portuguese habit. The capa or cloak, the remains of the Roman toga, is worn in Lisbon by every class of citizens, its use is not confined to auy particular season, but is continued in all weathers, and serves alike for protection agaiust heat and cold.

So much uniformity of dress prevails, that cocked hats form no particular distinction, but are seen on the heads of beggars as well as on those of the Fidalgos (Traditional title of Portuguese nobility). Ribbands are now worn across them, inscribed with mottos expressive of valour and patriotism.