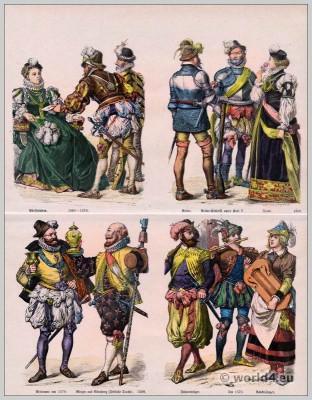 Top row left: Noblewomen and noblemen in Spanish fashion of the years 1565-1570 Right: Knight and General in armor and armament under Emperor Charles V,. German lady in the Spanish fashion of 1560.
Bottom row left to right: German nobleman in the fashion of 1570. Citizen of Nuremberg in festive costume from the year 1588. Right: Standard bearer and flutist in Spanish pants and doublet, ballad singer to 1570.