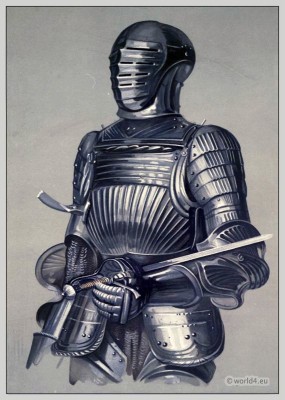 Armor from hall door of Abbotsford designed for a French knight.

THE description of this gabion given by Sir Walter Scott is so connected with the story of a companion suit of armour that we venture to give the passage referring to both. The cuirass represented in this drawing belongs to the second in order of description.
“The one was designed for a French knight, one of the gendarmes of the Middle Ages. He must have been a man considerably under the middle size, and the suit of armour exhibits one peculiarity which will be interesting to students of the learned Dr. Meyrick. The shield, which is very rarely the companion of the suit of armour, is not only present in this case, but secured in an unusual manner by nails, with large screw heads, instead of being hung round the neck, as was common during ‘a career,’ the hands being thus left free, the right to manage the lance, the left to hold the horse’s bridle. To complete this suit of armor a lance is placed in one hand exactly after the measure of one in Dr. Meyrick’s collection. In the other hand is a drawn sword, which is carved over with writing, and contrived so as to keep a record of the days of the Catholic saints. In a word, it is a calendar to direct the good knight’s devotions. The other suit of armour, which is also complete in all its parts, was said when it came into my possession to have belonged to a knight who took arms upon Richmond’s side at the field of Bosworth, and died, I think, of his wounds there. If one were disposed to give him a name, the size of his armour might suggest that he was Sir John Cheney, the biggest man of both armies on that memorable day. I venture to think for I feel myself gliding into the prosy style of an antiquarian, disposed in sailor phrase to spin a tough yarn I venture to think that the calendar placed in the hand of the little French knight originally belonged to the gigantic warrior of Bosworth Field. I imagine it was withdrawn for the purpose of supplying its place with a noble specimen of the sword of the Swiss mountaineers.” The cuirass measures 47 inch round the chest and 37 inch round the waist.