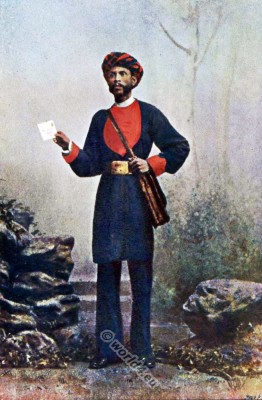 In whatever part of the world we may reside, there is always a degree of interest attaching to the postman, whether he be black, white or brown. The familiar “rat-tat” of the English postman is unknown in India, possibly because there are no knockers, and in many cases no doors. But we hear in its stead the remark of the butler as he brings us our morning dâk or English mail- “Chitti hai,” he says, and if he has not been too greatly spoiled by the influences of a free English education, it is possible he may also condescend to address you as Sahib or Sir.
Frequently the dak-wallah, as he is called, does not read English, and the name of the person to whom the letter is addressed is to be found, written in the vernacular, on the back of the letter. Government provide the men with a good serviceable blue dungaree uniform, and a waterproof cape during the monsoon. Sandals are worn more often than boots, and, when the rains arrive, the trousers are exchanged for knickerbockers.
In Ceylon, in districts where the mails are light and the roads either bad or non-existent, Tamils are employed as “runners” between one village and another. They are clothed with little more than a Dhoti, and armed with a short stick to defend themselves against the possible attack of either robbers or snakes. A Tamil tapal runner will go at a good swinging trot for hours-a run of twenty miles or so being looked upon as a mere nothing.

At Christmas time our postman does not omit to remind us that it is an occasion for the donation of “baksheesh,” nor is he alone in this particular; every man, woman or child, whom duty brings into the shadow of your presence, comes to “say salaam.” Even those not included in the above category “say salaam” also. The man who brings round the tax papers adds insult to injury by joining the crowd, and, when asked what service he may have rendered to entitle him to remuneration, replies that, although it is true his arduous labours are not entirely on your account, yet, as he is willing to do anything that may be required in the future, surely he will not be forgotten?