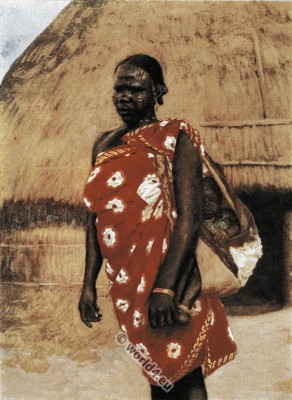 Showing how they carry children in the “Dufa”. The Lendu are an ethnic group in the eastern Democratic Republic of Congo (From “Uganda and its people”.).

Source: Living Races of Mankind. A popular illustrated account of the customs, habits, pursuits, feasts, and ceremonies of the races of mankind throughout the world by Henry Neville Hutchinson (1856-1927), John Walter Gregory and Richard Lydekke. Published by Hutchinson & Co. Paternoster Row, London 1902.