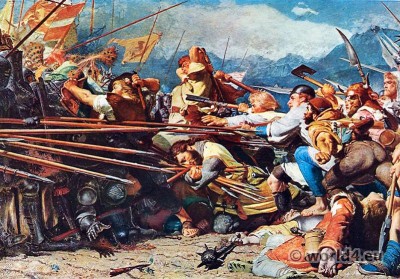 Arnold Winkelried in the Medieval Battle scene at Sempach Switzerland at July 9, 1386.

Arnold Winkelried or Arnold from Winkelried († allegedly July 9, 1386 in Sempach) is a mythical figure, which plays a role in the history of Switzerland. The Battle of Sempach (Canton Lucerne) took place July 9 1386. It applies in the history of Switzerland as the culmination of the conflict between the Habsburgs and the Swiss during the Swiss Habsburg wars and was an important event for the independence of the Confederation. The battle is considered as exemplary of the medieval order of battle of the Pike square. It is also the birth of the legend of the hero Arnold von Winkelried, which is sung in the Battle of Sempach song. Then he should have thrown themselves into the spears of the enemy to make a breach for the federal attack.

Here is a monogrome variation of the battle scene which still appears more expressive than the above-colored illustration. 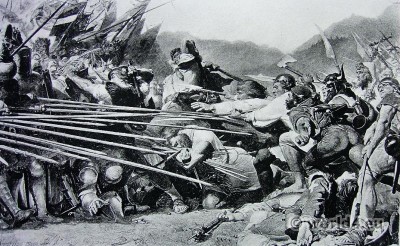