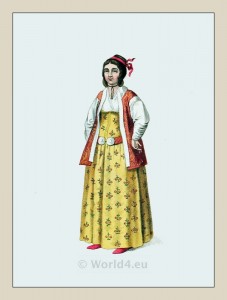 A Turkish female of Pera

A Turkish female of Pera.

PLATE XVI. was a representation of a woman at Constantinople, as she appeared in the streets enveloped in her mahramàh and feredjè. The present plate is the portrait of a female living at Pera, as she appears in the interior, or harem. Her beauty, according to European ideas, would consist chiefly in her face; as the immoderate use of the warm bath, together with their mode of life, and manner of sitting, completely destroys all elegance of form, while the situation of the girdle, unlike the Grecian style, increases this appearance even to a disgusting excess. If it were not for this circumstance, the manner of dress would not by any means be so unbecoming or inelegant.