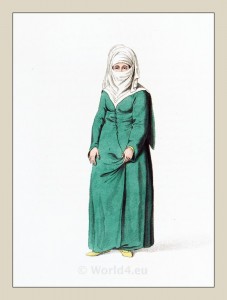 A Turkish woman at Constantinople.

A Turkish woman in the dress worn at Constantinople.

IN plate the fourth there was given a portrait of a Turkish female of one of the provinces; the one here represented is that of a female as she appears in the streets of Constantinople. It is different from the former.
The feredjè is universally in that city made of green cloth or other stuff, with its long square cape quilted and covered with green silk. The beauty of the Turkish, but more particularly of the Circassian or Georgian women is proverbial; but in most of them it must be confined to the face. From the mode of sitting on their sofas they stoop very much, and walk awkwardly; and the immoderate use of the warm, or even hot bath, with continued indolence, produces such relaxation, as to spoil a form which nature made equal to their faces. The latter are remarkable for symmetry and complexion.
Their nose is Grecian and their eyes, though generally small, and either black or dark blue, are brilliant and piercing. The custom, too, of drawing a small line above and beneath the eyelash, adds to the effect. They stain the nails both of their fingers and feet of a bright rose colour. Hence probably arose Homer’s epithet of “The rosy-fingered morn.“