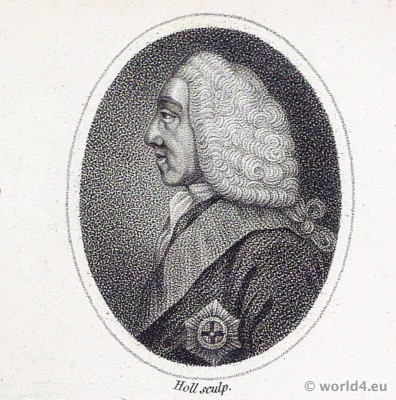 THIS arbiter of elegant manners was born in London, in 1694. He received his education at Trinity College, Cambridge. In the first parliament of Georg I. he was elected a burgess for St. Germains, in Cornwall; and in the next, for Lestwithiel, in the same county. In 1715, he stood foremost among those who loyally tendered their lives and fortunes to oppose the pretender; and in 1723, he was appointed captain, of the yeomen of the guard. He had more or less distinguished himself from his first entrance into parliament; but, becoming earl of Chesterfield, on the death of his father in 1726, he entered the house of lords, in the ranks of the opposition. After the accession of George II. he was sworn of the privy council, and in 1728, appointed ambassador extraordinary to Holland, the Hague being the centre of the principal negociations then carrying on through Europe. Upon his return, in 1730, he was elected a knight of the garter, and appointed steward of the household. Soon after 1732, he married lady Melosina de Schulenberg, countess of Walsingham, and natural daughter of George I. by the duchess of Kendal.

In the general course of his conduct in parliament, he only opposed administration when he was convinced that their measures militated against the honour and interest of his country. In 1737, he gave great offence to the court, by voting in favour of an address to his majesty, requesting him to settle 100,000l. per annum upon the prince of Wales.

In 1741, his health being much impaired, he visited Spa, and saw Voltaire, with whom he had contracted a friendship in England: he went to Paris, and to the South of France. At the beginning of 1745, being again nominated ambassador extraordinary and plenipotentiary to the states general, he embarked for the Hague. His mission was successful; and, in the mean while, his majesty appointed him lord lieutenant of Ireland. In April 1746, he left that country, equally esteemed by the Roman Catholics and Protestants, and followed by the universal regret of that generous nation.

In October ensuing, being pressed to take the seals, and to succeed the earl of Harrington, as secretary of state, he held them till February 1748, when he wished to resign; on which his majesty said, ” I will not press you, my lord, to continue in an office you are tired of; but I must insist upon seeing you often, for you will ever live in my esteem.” His senatorial exertions, after this period, were few, but always important.

By his wife, Lord Chesterfield had no issue; but he had a natural son, Philip, by Madame de Bouchet, a French lady, whilst he was at the’Hague. Upon this young man his care and attention were bestowed, to a degree of idolatry; and though he did not possess the graces, his integrity, and other valuable qualities, fitted him for several diplomatic situations. Residing mostly abroad, he was carried off by a dropsy, in the South of France, in November 1768, when his afflicted father first learnt he had been secretly married several years, and had left two children, whom the earl, to his honour, immediately took upon himself the care of providing for.

The British Cicero, as his lordship was called, died at Chesterfield House, near Grosvenor Square, March 24, 1773; and, according to his desire, was buried privately in the vault under South Audley chapel. His lordship’s literary character was certainly high, notwithstanding his conduct towards Dr. Johnson; and his Letters to his Son, which though partially condemned, have been universally read. These were published by that gentleman’s widow, after his lordship’s death; and even Dr. Johnson allowed they might be made a very pretty book.