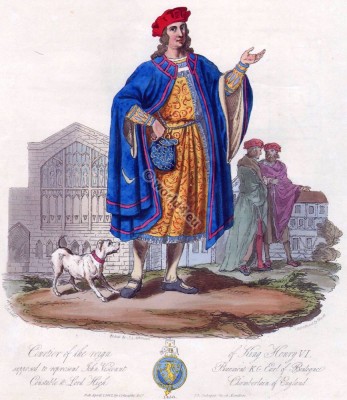 John Beaumont, 1st Viscount Beaumont KG (1409-1460) was an English nobleman and the first person who was awarded the title Viscount. He was a faithful follower of the Lancaster-party and distinguished himself throughout his life both in the Rose wars as well as at the court of the Lancaster kings as courtier from. Already on May 19, 1426 he was knighted. Because of his loyalty to the House of Lancaster and his services the king rewarded him abundantly. On July 27, 1436 he was elevated to the Count (Comte) of Boulogne in France; soon after, he was awarded the never before lent in England the title of a viscount, becoming the 1st Viscount Beaumont on February 12 1439. It was also determined that he should take precedence over all barons of the empire. In 1441 he was awarded to the Order of the Garter. In addition, he also held in England several high political office: 1445-1451 Constable of England and from July 8, 1450 Lord Great Chamberlain.

He fell in the Battle of Northampton. The Battle of Northampton took place on 10 July 1460 as part of the Wars of the Roses. As Wars of the Roses the run with interruptions from 1455 to 1485 fighting between the two rival English aristocratic houses of York and Lancaster are referred. Both noble houses were different branches of the house of Plantagenet and led their lineage to King Edward III. back, whence they derived their claim to the English crown. The coat of arms of the two opposing families contained roses (a red rose for Lancaster, a white rose for York), so that for this conflict later the name “Wars of the Roses” established.

Note:  Costumes from Friesland in the 16th Century.