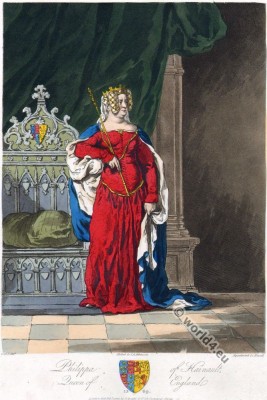 Philippa of Hainault. Queen of England

Philippa of Hainault. Queen of England 1369.

Philippa of Hainault;, or Philippa d’Avesnes, Countess of Holland-Hainaut, 1311-1369 was the wife of King Edward III. of England. She became on January 24, 1328 in the Cathedral of York with the fifteen year old Edward, her second cousin, married. In historiography she is considered to be a good-hearted woman who her husband after the siege of Calais (1346) dissuaded him, through the execution of six posh citizens to make an example.

From the marriage with Edward thirteen children were born, including five sons who lived to adulthood and whose rivalry were ultimately be triggers of the Wars of the Roses.