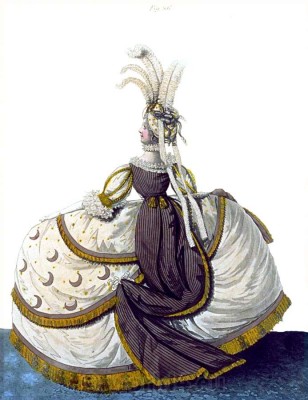 FIG. LXXXVI.
The hair in small curls, the hind turned up short, and returned from the chiffonet in ringlets. Chiffone of white satin with gold spangles, crossed in the front with two gold chains, ornamented with several diamonds, and looped on the left side with a large brilliant; one large white ostrich feather on the left, and three on the right side. Petticoat of white satin, trimmed with a large gold fringe, headed by a broad maroon velvet riband. Drapery of white crape with gold spangles, also trimmed with gold fringe and maroon velvet ribands. Body and train of maroon and black striped velvet, trimmed round the neck with a triple plaiting of blonde, behind with two gold tassels, and the train with a gold fringe; full sleeves of crape, embroidered in gold, trimmed with triple ruffles of blonde, and a broad gold band. Full ruff of plaited blonde round the neck. Diamond ear-rings. Lappets of blonde. White gloves and white shoes embroidered in gold.