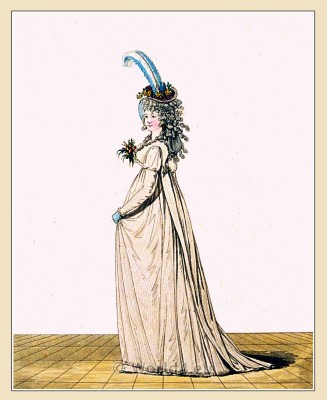 HEAD-DRESS. Bright puce-coloured hat, with an embroidered purple border, lined with blue, and trimmed with a garland of flowers; a parti-colored ostrich feather placed on the left side. A large toupee frizzed into light curls, the hind hair turned under, the ends returned, falling lower than the chignon, and thrown into ringlets. A wreath of white Bowers in the toupee. Robe and petticoat of striped muslin; the robe braided on the back, confined to the waist by a belt, trimmed round the neck with lace; long sleeves, trimmed at the wrists with lace; short full sleeves of clear muslin, fixed at the top and bottom to the long sleeves. Small handkerchief put within the robe. Gold ear-rings. Light blue gloves and shoes.