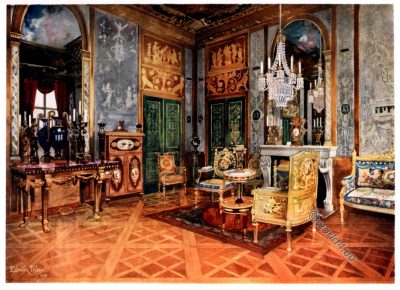 THE Salon de Musique was designed and decorated-if one may accept the high authority of Lady Dilke by the brothers Pierre and Jean Simeon Rousseau de la Rottière, who, with other members of their family, did so much at Fontainebleau, Versailles, and Compiègne, in addition to decorating many private salons, such as the interesting little nook (réduit) or boudoir of La Marquise de Sérilly, in the National Collection. In the panels one detects traces of Pompeian influence.

We have ventured to refurnish this brilliant salon with some famous and characteristic examples of Louis XVI. decorative furniture.

The gilt console from the Petit Trianon evidences the completeness of the severance of taste from Régence and Rococo modes. Instead of the cabriole and curving lines throughout, we have a restrained and right-lined composition.

The pedestal secétaire of inlaid mahogany with plaques of Sèvres is accredited to Riesener. The writer call not express his liking for the contrast of the glaringly white ground china painted plaques, which the designers and ebénistes of Louis XVI. days, not content with the color resources already at their command, used in conjunction with rosewood and dark mahogany.

The subjects painted upon these plaques and medallions, in the unique examples in the Jones Bequest, are usually paniers of foliage and flowers, with birds, but figures and landscapes were also introduced at times.

Signed by both Pafrat and Carlin, who worked together, with the addition of the initial letters M E denoting the menuisier ebéniste, the little table shown in the annexed plate illustrates also the monetary value of the Jones Bequest. Its owner was offered and refused £5000 for this simple little piece of furniture and the equally small writing table illustrated among our outline sketches of the period.

One cannot regard this as the art value of these pieces,-excellent as they are in their design and craftsmanship,-since they owe no small part of their value to their clearly proved association with Marie Antoinette, who gave them to Mrs, Eden, afterwards Lady Auckland.

The oval-backed arm-chair of carved and gilt wood from the Wallace Collection, covered with silk brocade, would also supply, in a modified form in all probability, were it for sale, another instance of the added value of historical association, since it belonged to the Empress Maria Theresa of Austria, the mother of Marie Antoinette; the other fauteuil shown from the same collection relies upon its decorative merits alone.

In striking contrast to the refined luxury of these chairs, and offering a further illustration of the value of historical association, are two plain chairs of wood and straw, now in the Musée Carnavalet, Paris, provided for and used by Louis XVI. in his gloomy prison, the Temple. These chairs derive their undoubted monetary value entirely from their history.

Source: The book of decorative furniture, its form, color and history by Edwin Foley, 1910.