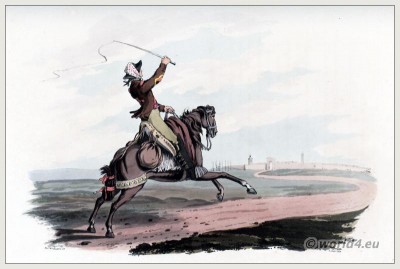 A COURIER’S approach to a town, is always announced by the loud cracking of his whip, and the jingling of bells attached to his horse’s furniture.
The peculiarity of the Courier’s dress, consists in a small hat, tied with a handkerchief under his chin, a jacket ornamented with slips of different coloured cloth, at the elbows and seams behind, and strong guards of leather worn over his knees.
The Spanish saddle is of very clumsy workmanship, much raised above the back of the horse, having a sort of wooden frame for the thighs, and wooden stirrups, bound with iron. Leathern bags, for the purpose of carrying letters, are suspended from the back of. the saddle, resting on the horse’s flanks; and bells are attached to the breech-band. Thus equipped, the Courier proceeds over all the variety of roads, at a brisk canter, generally quickened into a gallop on entering a town.

Note:  The ordinary dress of a Peasant of Torres Vedras.