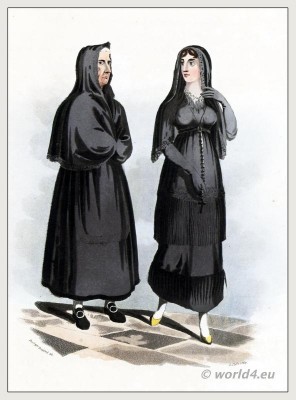 The Spanish Ladies, whose charms have been so often celebrated in romance, have in reality great personal attractions.
Their complexion, though generally dark, is clear, their features regular, their persons well proportioned, and their air peculiarly graceful.
Notwithstanding a general fashion has been introduced amongst people of rank throughout Europe, a distinct dress, wholly Spanish, and such as prevailed before the accession of the Bourbon family, is still retained, not only by those of inferior degree to the nobility, but by some of the nobility also, and particularly in the provinces at a distance from the capital.
The female attire of the description alluded to, is represented in the sketch. Its peculiarity consists in a mantilla, or veil of lace, and in a satin dress, ornamented with velvet, over which is worn a body of lace, reaching nearly to the knees, and fringed with silken cords. A coloured habit of this fashion is sometimes used, but black is more general, and always worn at mass.
The young Ladies are accompanied to their devotions by aged attendants.

Gallery: The Peninsula War.
Source: Sketches of the country, character, and costume, in Portugal and Spain, made during the campaign, and on the route of the British Army, in 1808 and 1809.