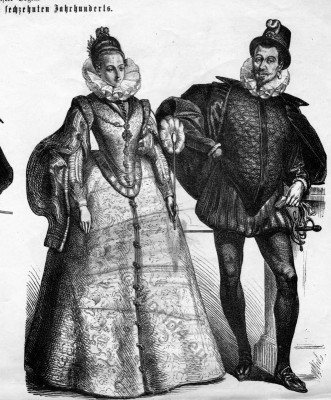 Time of the late Renaissance, the Thirty Years War, marked by the Counter-Reformation, with the associated dominance of the Spanish Baroque. Beret, cutlasses, buckled shoes, crinoline (Verdugado), ruff, gold and silver brocade.

The men wears a typical element of the Spanish fashion, the short, loose-fitting cloak, called the Spanish cape with large collar. This was not buttoned and was loose over her shoulders.
This he wears a waist-length jacket, camisole, which was named after its final form “goose belly”. It is closed by a central row of buttons. It was padded and formed beads on the sleeves. The sleeve cuffs are finished of frills. The slit harem pants has a high waist and is, like the quilted jacket and produced a wide hip. This he wears buckled shoes and stockings. The high cap is decorated with silk ribbon and feather. Gloves, beard, and a long rapier perfect the equipment.

The clothes of the woman meets the men’s. A stiff corset bodice with drop waist. The narrow sleeves and collar are also completed by ruffles cuffs. The slotted sleeves with long cloth ribbons, which look like a throwback to the Burgundian fashion of Houppelande. The style is worn high, given the limited range of motion. The skirt, Verdugado, forerunner of the crinoline is floor length and richly ornamented. At the end of the 16th century was that, having regard as pictured here, through a framework of whalebone and iron. In her hand she holds a fan made of feathers. Jewelry serves as a valuable, simple necklace.

Under the skirt, several stiff petticoats were worn in linen, who were usually also richly embroidered. The Shiloette is a cone.
The shoes, called Kothurne, were made of wood or cork allowed the only reduced movements. The collar is decorated with fine lace, and is now, with both costumes, worn as a stand alone decorative element. The hair is styled smooth and is studded with precious diadems.