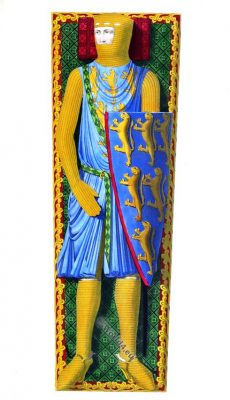 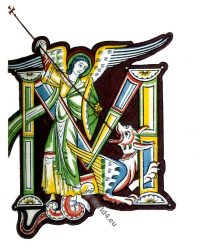 Initial letter from MS. Arundel, No. 91. Known as Psalter and Book of Hours (the ‘Howard Psalter and Hours’), 14th century. Attributed to John of Metz ‘De Lisle Psalter’

MUCH of romantic interest is attached to the name of Longuespee. The first of the name, who is represented in our plate, was the son of King Henry II. by his celebrated mistress, Fair Rosamond.

His wife Ela, was also a heroine of romance. She was the sole heiress of the powerful family of the D’Evereux, earls of Salisbury; and it is said that, having been concealed in Normandy, she was discovered by a valiant English knight named Talbot, who found access to her in the guise of a minstrel, and, succeeding in carrying her away, presented her to King Richard at London.

The English monarch gave her in marriage to his chivalrous kinsman, William Longespée, on whom he also conferred in her right the estates and title of Earl of Salisbury. William Longuespee was actively engaged in the baronial wars in the reign of King John, of whom he was a devoted partizan.

Early in the reign of Henry III. this nobleman accompanied the Earl of Chester to the Holy Land, and was present at the battle of Damietta, in which the Christians were defeated by the Saracens. He afterwards was engaged in the Gascon wars. In his return to his native land an incident is said to have occurred which affords a remarkable illustration of the manners of that superstitious age.

“There arose so great a tempest at sea, that, despairing of life, he threw his money and rich apparel overboard. But when all hopes were passed, they discerned a mighty taper of wax, burning bright at the prow of the ship, and a beautiful woman standing by it, who preserved it from wind and rain, so that it gave a clear and bright lustre.
Upon sight of which heavenly vision, both himself and the mariners concluded of their future security: but every one there being ignorant what this vision might portend, except the earl: he, however, attributed it to the benignity of the Blessed Virgin, by reason that upon the day when he was honoured with the girdle of knighthood, he brought a taper to her altar, to be lighted every day at mass, when the canonical hours used to be sung, and to the intent that for this terrestrial light he might enjoy that which is eternal.”

William Longuespee died in 1226, not long after his return from the Gascon wars. During his wanderings, the Countess Ela, like another Penelope, was persecuted by the advances of a suitor—no less a person than Hugh de Burgh, who was afterwards accused by some of having poisoned her husband. After the Earl’s death, Ela retired to the abbey of Lacock, which she had founded, and became abbess of that house, in which one of her daughters also was a nun.

The first William Longuespee was buried in the Lady Chapel in Salisbury Cathedral, whence his tomb with his remains was removed about the year 1790, to the place they now occupy in the nave of the church. His effigy is a remarkably fine specimen of early sculpture. The colouring is very much obliterated on the more prominent parts, but a sufficient quantity of each pattern, or device, may still be traced to serve as authorities for a representation of it in its original state. 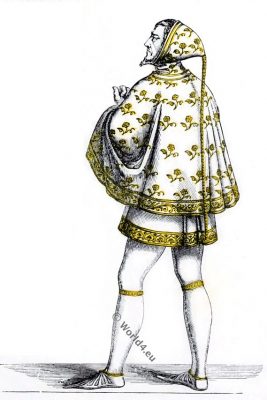 Cimabue the painter, actual name Cenni di Pepo,  (“Oxen-head”) was a Florentine painter and mosaic artist, who also entered the history of art as the discoverer and master of Giotto. As one of the first of the early Renaissance, he broke with the formalism of Byzantine art, and tried in a more vivid portrayal of man and objects.

The cut at the foot (above) of the preceding page represents Cimabue the painter, and is taken from a painting by himself. Cimabue is regarded as the reviver of painting among the moderns. He was a Florentine, born of a noble family in 1240, and died ca. 1302. He is said to have learnt his art of two Greek painters, invited to Florence by the senate to paint one of the chapels of the church of Santa Maria Novella. 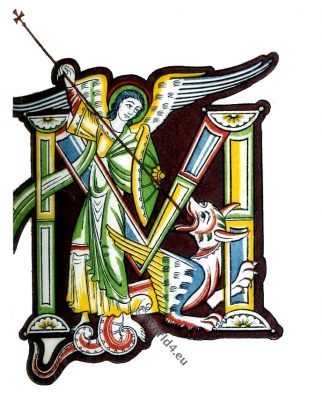 Initial letter from MS. Arundel, No. 91. Known as Psalter and Book of Hours (the ‘Howard Psalter and Hours’), 14th century. Attributed to John of Metz ‘De Lisle Psalter’

Our initial letter is from MS. Arundel, No. 91. The cut below is from an illuminated MS. of the Apocalypse (13th cent.) in the Bibl. du Roi at Paris. 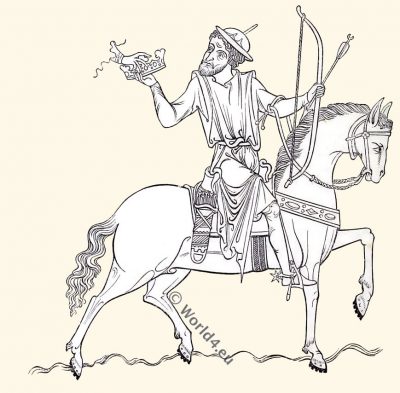