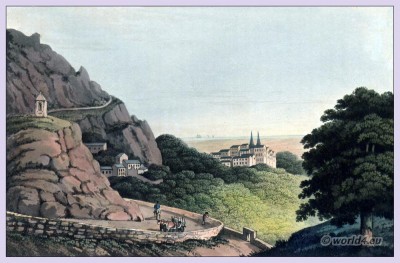 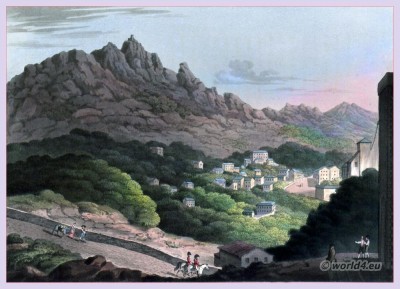 FROM Torres Vedras to Cintra the road lies through a series of military posts, and strong passes, and through the village of Mafra, celebrated for its magnificent palace and convent, which is justly considered as little inferior to the Escurial.

The beauties of the mountain and town of Cintra gradually unfold themselves, until at length the traven~r descends a hill by the church of Saint Sebastian, when the varied charms of this grand scenery, opens upon the view. The hold outline of the mountain, is from this point visible to a considerable extent. Its prodigious breaks and cavities, the numerous villas huilt along its declivity, amidst orange and lemon groves, and woods of forest trees, produce a landscape rarely equalled in picturesque character,

Among the principal villas which claim distinction, as to seite and building, is one belonging to the Marquis Marialva, but it is at present unoccupied. Another, little inferior, and famous for its gardens, is the property of the Marquis Pombal. A spacious Hotel, beautifully situated, looking over the town to the Atlantic, under the management of an Irish woman, furnishes excellent accommodation, and is an object, by no means devoid of interest to an English traveller.

The town contains about a thousand houses, three convents, and a palace, built by Don Emanuel, but now much neglected, and going to decay. The most surprising monument of the royal Founder’s piety, is a convent of Jeronomites, erected on the highest ridge of the mountain. Its elevation is said to he three thousand feet above the level of the sea.
(Cintra Portugal World Heritage Site in 1995.)