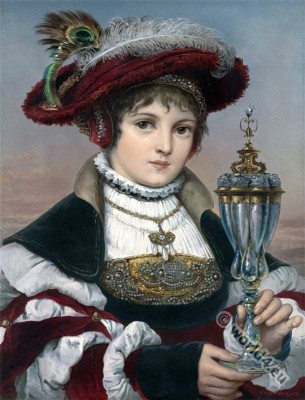 Portrait in the Renaissance style. Costume jewelry, hair and hat of the period of the 16th century modeled. Painted about 1880th.

Ferdinand Wagner (1819-1881) was a painter of the art direction of the Nazarene. His commissioned works ranged from minor ecclesiastical orders to the renovation of the façade painting at city palace of Jakob Fugger in Augsburg.
As a Nazarene art is called, a romantic religious art direction substantiated German artists at the beginning of the 19th century in Vienna and Rome. Representatives of this style, the Nazarenes, were mainly close to the Catholicism and not a few converted to him. The aim of the Nazarene was the renewal of art in the spirit of Christianity, with them old Italian and German masters served as role models. They influenced the art of Romanticism in 19th century Germany.