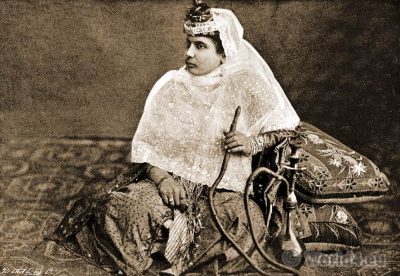 Lady of the harem. Shahrazade.

On Thursday, July 1st, a Turkish lady of high rank made her escape from the Harem of the ex-Sultan Murad, and sought British protection. Here is material at hand for an enterprising novelist to write a romance, having for its title the “Mysteries of Constantinople.” The adventures of the lady Shahrazade whom we may call the “Mysterious Maid of Stamboul,” would make a capital heroine for at least one chapter of such a book. Shahrazade was brought, disguised, to Therapia in the steam cutter, and quarters were given her on board the Antelope. From what could be gathered about her we were led to believe she was one of the favourites of the Imperial Harem, a bright star among the group of beauties who are supposed to adorn that celestial abode, the choicest of the Houris, perhaps the chief amongst the hundreds of its inmates.

From a remark of hers she intimated that, could we only comprehend her former greatness, position and rank, we should at once bow our heads in the dust before her! It seems, since the ex-Sultan’s deposition, he had,although a prisoner in the Tcheraghan Palace, been allowed the attendance of the ladies of his Harem, to minister to his wants and requirements. This lady being one amongst the many whether she had got tired of the monotonous life we could not discover said they wanted to marry her to some Pasha she disliked, and she then con- ceived the idea to escape and seek British protection.

I was much gratified at the opportunity thus afforded me of seeing a Turkish lady in neglige, and I was enabled to glean a little from her concerning life in the Harem. She remembers having been brought, when very young, from Georgia, and finding herself an inmate of the Imperial Harem at the age of fourteen. All her companions, like herself, were the offspring of semi-barbarous parents, who have no scruple in selling their children to the highest bidders. No matter how low in the social scale their starting point may be, all have a fair chance of winning rank and distinction in the career before them so long as they remain good-looking. — The young and pretty Hanoum as was probably the case at one time of the lady I now write of—doubtless owed her success in life from being one of the beauties from a selected few presented to the Sultan on the occasion of the yearly offering made at the Feast of the Bairam, and who,we will suppose,from that date found favor in the eyes of her lord and master.

Ottoman Sultans, with but two exceptions I believe, have never, in our acceptance of the term, been known to marry. The mates of the Sultan, chosen from time to time from amongst the rank and beauty of the inmates of the Harem, rise in favor according to their charms. It is not at all difficult to imagine, amongst the hundreds of lovely women here gathered together, the amount of jealousy that exists when two or three from their midst have been selected to become special favourites. But the whims and caprices of Sultans are of so uncertain a nature that the favourite, though in the zenith of her power to-day, may be a disgraced out- cast on the morrow. Consequently, they are obliged to have recourse to every art and device which may improve and preserve their beauty (which, in an Eastern clime, soon fades), to fight hard against the intrigues of their rivals, and carefully watch over their offspring—should they have any—which is an essential qualification .to becoming a favourite.

Theirs must be a strange and fascinating life while in the height of their popularity. They are then provided with separate apartments from the others, having their own attendant slaves, their own carriages to drive in and their own caiques to convey them when visiting friends on the Bosphorean shores. They are supplied with the choicest apparel and jewellery and all requisites for their exalted rank, they dine in their own apartments, receive their lady visitors, and are permitted occasionally to go beyond the walls of their prison. Fancy one attaining this rank (as the lady I speak of did). What a new world, dazzling with gold, luxury and refinement was thus opened to her! She is raised far above all her former com- panions, who now, setting aside all previous familiarities, stand before her with folded hands and kiss the hem of her garment with profound respect. So we presume Shahrazade went on enjoying life in this way for years, preserving all her beauty, all her charms, and filling her position with grace and dignity. To have been so successful proves she was above the average. It was probably due to her winning ways that she gained the good- will and esteem of those about her, a task by no means easily performed.

As a rule Turkish women are kept in a state of ignorance, but the one I speak of seemed, even in this, an exception, if I may judge from her observations. Although, perhaps, her conversational re- sources were limited, yet the sweetness and poetry of the language she used, the pretty manner in which her expressions were worded, and the spirited repartee she seemed to have command of, had a charm which atoned for the limited knowledge displayed in that kind of chit-chat one is accustomed to listen to in English society. What an insight into Harem life she could disclose! What an interesting sketch she might produce of events in her past career! When speaking of what a lottery a beauty’s prospects were when once a footing was obtained within the “walls of bliss,” she remarked that every slave, from the scullery-maid to the fair and delicate beauty purchased for her personal charms, may hope for, and even aspire to attain the highest rank.

The instance of the mother of Abdul Aziz may be cited, for it is said she at one time performed the most menial offices in the establishment. When thus engaged, one day, she happened to attract the eye of her Imperial master, who eventually was so pleased with her that she rose to distinguished favour and was promoted to the highest rank. 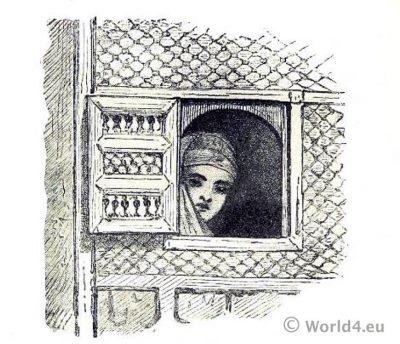 A window of the harem.

Again, Shahrazade, remarking on her early days, said she well remembered the occasion when she first attracted the Sultan’s attention. He was at the time so delighted with her beauty that he sent for the superintendent of the Harem, and notified his desire to receive her. She then went through the usual preliminaries—was bathed and dressed with great care and elegance, and eventually introduced to the Imperial presence.

All she did found favour in the eyes of her lord and master, and from that date she was admitted to the circle of the select few who were ever at hand to minister to his special wants. The training she now received depended much upon her personal attractions. Being at this period young and fascinating, she was instructed in all the formalities of Turkish etiquette,dancing, singing and music. It can well be understood that, amongst the thousand or fifteen hundred women who were at this time (and, in fact, are now) inmates of Imperial Harems, there are, of course, many who never enjoy a passing glance from His Majesty, and disappoint mentis, naturally, very deeply felt by them on seeing they are likely to remain in a subordinate and unrecognized position, after having, perhaps, at one time had their hopes and ambitions raised to higher things.

This disappointment tells on them, and especially on those of a sensitive disposition. They also suffer from the taunts and sarcasm of the more favoured ones, or the jealousy engendered in their breasts consequent on learning of others gaining honour and distinction, while they themselves are left behind in the race. Brooding over their grievances brings on ailments from which many reach an early grave. There were, however, many, she remarked, who were famous for their excesses, disorderly conduct and unruly disposition, who, seemingly endowed with the bump of cunning and mischief, would carry out, in spite of high walls and the careful surveillance of more than a hundred watchful eunuchs, all sorts of mad freaks, such as would shock and scandalize the Mohammedan community were their doings known. She said that, by bribing these so-called guardians, there was no difficulty in having an outing, disguised in European costume; when, after meeting their clandestine lovers, they would return again to their quarters, without any of the higher officials being any the wiser.

Of late, however, she said, all the grand and good times for them had passed. It was during the late Sultan’s reign when they used to have such enjoyable garden parties in the Palace grounds; music, dancing, and illuminations like fairy land; when all, ladies and slaves, had but one object in view: that of rendering the scene pleasing and entertaining to their master—so there was a time when it was worth while being a Sultan. But the cares of State and the miserable condition of the Empire caused a change to come over the spirit of their dream. Now came the time—Murad had been deposed— when Shahrazade’s bright and sunny life was to be overcast and clouded; her star was on the wane; she was no longer required. What she had done to forfeit the proud position she had so long enjoyed I could not learn. Suffice it to say that orders had been whispered for her banishment from this her happy home; and a husband was found for her in an old, decrepit Pasha from some distant province. This did not suit her, so she decided on flight. She obtained permission to visit some acquaintances in Pera, and remained the night at their house.

Following morning, before any of the inmates were astir, she left the house and went to the British Embassy, where she sought shelter, and the Ambassador, who was at his summer residence at Therapia, was communicated with. Later on she was disguised and, wearing European costume, was brought in the steam cutter to the Antelope. She was delighted on reaching her destination and soon fell into the manners and customs of the Giaour,”eating and drinking in our”— presence which is not permitted according to their code and so conducting herself as to win our pity and regard.

However, her stay with us was not long. Negotiations between the Ambassador and the Porte resulted in our having to give her up to the Turkish authorities, but only on the understanding that no harm should befall her. She never returned to the Imperial Harem, but for some months resided at the Sultan’s expense with an Armenian family on the shores of the Bosphorus. About a year after this escapade she was married to a man of her own choice, and now lives happily at Ismid. We hear from her occasionally, and there is always a reminder of the pleasant and happy times she had with the “Giaour” on board the Antelope.

Note.— Shahrazade, before becoming an inmate of ex-Sultan Murad’s Harem, had for some years previously been Superintendent of the Imperial Harem of Sultan Abdul Aziz.

Source: Life on the Bosphorus. Doings in the city of the Sultan. Turkey, past and present, including chronicles of the Caliphs from Mahomet to Abdul Hamid II. by William J. J. Spry. Published: London H. S. Nichols 1895.