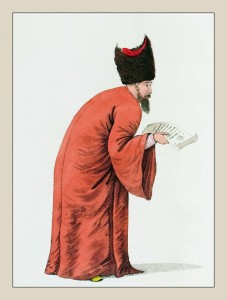 THE class of Dragomen, or interpreters, is very numerous in Turkey; but more particularly so in Pera, the great suburb of Constantinople, and which it almost rivals in beauty as well as extent, being near two miles long. These men are absolutely necessary for the transactions of all business between foreigners and Turks. There are also a certain number, sometimes even thirty, attached to the different ambassadors, and having once become such, they continue their office for life. In consequence of their number in Pera, the confusion of language there is excessive. It is astonishing with what facility some of these Dragomen have acquired and speak six or seven different languages. A great number of those who live at Pera, are descendants from Venetians, who formerly came in the trains of the ambassadors from that state.