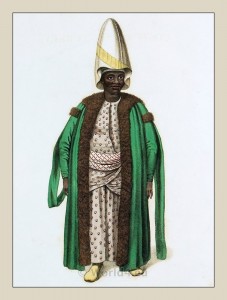 IN the various and complex government of the Grand Seignior’s Seraglio, no person holds a more important office than the Kislar Aga; the business of this person being to direct and take care of every thing belonging to the females of the place. As he has the whole interior management of their apartments, he has various opportunities of ingratiating himself with the Sultan: and thus he often becomes a most powerful friend, or enemy, to the other great officers. The story of throwing the handkerchief is not a fact, according to most modern writers. The fortunate fair one whom the Sultan honors with his regard, is informed of the circumstance by the Kislar Aga; and this, among the Sultanas, is reckoned the highest mark of respect.