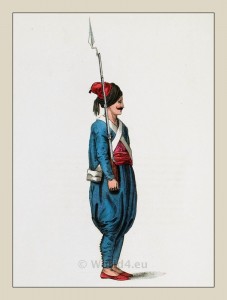 BESIDES the regular and constant soldiers, comprehended under the classes of Janissaries and Spahis, there are several others, which are more particularly raised during the time of war. The present plate represents what might be called a soldier of the new establishment, that is, as distinguished from the Janissaries and Spahis. There have also been established for some time past a corps of about thirty thousand men, called Topchis, or gunners. They are infantry, and receive rather small pay. They are scattered all over the empire, and, whenever they receive their orders, are obliged to repair to the different places, appointed for them to assemble.