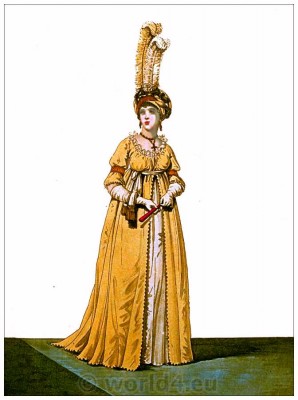 Turban of orange-colored satin; gold and silver spangled bandeau; the hair (with or without powder) drawn through in different parts of the turban; the hind hair turned up short and plain, the ends returned and formed into a large curl at the top of the head; one salmon-coloured, and one white ostrich feather, with several diamonds, placed in the front. White satin petticoat. Robe of orange-colored crape, scollopped and trimmed round the neck with lace; short sleeves equally scollopped. Sash of white satin riband, tied at the right side, the ends trimmed with a gold and silver fringe. Large pearl ear-rings. Diamond necklace. Large gold upper bracelets. White gloves and shoes.