FRONT OF THE CHURCH OF THE RESURRECTION.

GATE OF THE ENTRANCE-DOOR TO THE CHURCH OF THE RESURRECTION.

FIG. 1. Plan of the Church of the Resurrection.

Fig. 2. Levels in the Interior of the Church of the Resurrection.

a. Upper Level of the Southern Road of the Church.
b. Upper Levels of the Vestibule of the Cburch.
c. Chapel of the Agony.
d. The Place where the Hole of the Cross is said to be.
e. The Place where Christ was Crucified.
g. Latin Chapel.
h. Longinus’ Chapel.
i. Greek Chapel.
k. Interior of Christ’s Tomb.
m. Christ’s Prison.
p. Tombs of Joseph of Arimathea and Nicodemus.
o. p. Level of the Church within the large Dome.
r. Lower Level of the Tomb of Joseph of Arimathea and Nicodemus.
s. Chapel of the Invention of the Cross.

Fig. I. Monument of the Holy Sepulchre.

Note:  Travellers at the tomb of Aaron, on the summit of Mount Hor, near Petra.

DETAILS OF SEVEN CAPITALS IN AND NEAR THE CHURCH OF THE RESURRECTION. 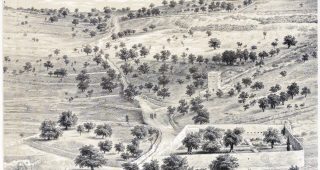 Mount of Olives and the Garden of Gethsemane at Jerusalem.

Jerusalem. S. Pelagias Tomb on the Mount of Olives.