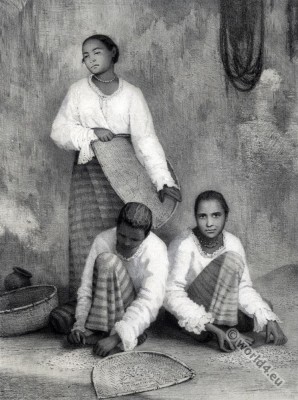 The coffee berry, when brought down from the hills, must go through a series of preparations before it is fit to be shipped for Europe. It is skinned by machinery, dried on large platforms near the storehouses, and finally picked by hand. This work is performed in Colombo by hundreds of female native. The Plate represents three Sinhalese girls from 13 to 16 years of age, employed in coffee picking in one of the vast storehouses of Mrs. Worms in Colombo.