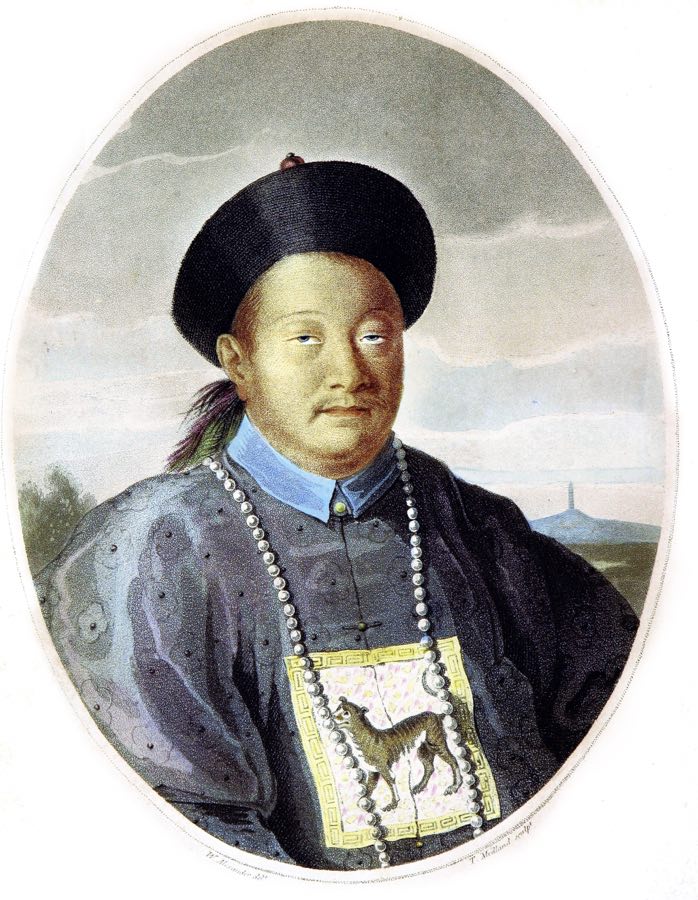 Source: Travels in China, Containing Descriptions, Observations, and Comparisons, Made and Collected in the Course of a Short Residence at the Imperial Palace of Yuen-Min-Yuen, and on a Subsequent Journey Trough the Country from Pekin to Canton. Author: Sir John Barrow. London: T. Cadell & W. Davies, 1804.

Sir John Barrow, 1st Baronet (1764 – 1848) was a British civil servant and historian. He took part in the first British embassy in China under Lord George Macartney. As private secretary to Sir George Leonard Staunton he was a member of the British Embassy in China. Barrow was a member of the Royal Society and one of the founders of the Royal Geographical Society, founded in 1830. As secretary of the Admiralty initiated and promoted Barrow several official and semi-official expeditions, especially to West Africa and in the North Polar Region. These enterprises include the expeditions of Sir John Ross, Sir James Clark Ross and Sir John Franklin.

The dog is a sign of dignity both in China and Siam. It appears at the portrait VAN TA GIN in Barrow’s Travels in China wears on his breast.

The dog has howled over the guilty in the infernal regions of Indian, Grecian, and Roman mythology. In the hells of the Hindus, the Burmanese, and Siamese, he yells in the ears of the guilty shades and tears them to pieces.
Latter Siamese writings show that the Sunak Kamim or Dog general is an honorable title in the field. In Japan the dog is held in high estimation the cause does not appear to have been entirely of a religious nature. It was owing to one of their kings having been born under the sign of the dog.
The Cerbara of Hindu mythology one of the dogs of Yama is indubitably the Cerberus of the Greeks but YAMA himself BUDDHA observed is merely a name and has no existence but in the mind’s eye. (Source: Transactions of the Royal Asiatic Society of Great Britain and Ireland, Vol. 3)