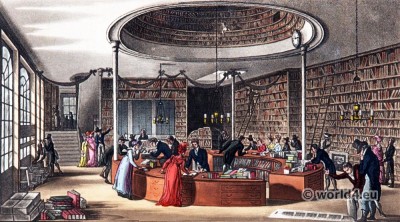 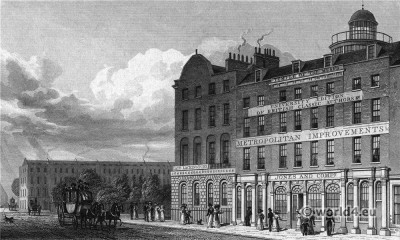 This magnificent structure is situated at the S. W. corner of Finsbury Square, and was fitted up for the reception of books in the year 1794. The dimensions of its front are 140 feet in length, and the depth 40 feet. The internal arrangement of the building is perfectly novel, containing on the base a ware-room, the capaciousness of which may be readily conceived from the circumstance of the Weymouth mail, with four horses, having actually been driven round it at the time of its first opening. This room, which is 15 feet in height, is supported by pillars of iron. On one side are distinct offices for counting-house business, wholesale country trade, and a department for binding, terminating with two spacious and cheerful apartments looking towards Finsbury Square, which are elegantly fitted up with glass cases, inclosing books in superb bindings, as well as others of ancient printing, but of great variety and value.

These lounging rooms, as they are termed, are intended merely for the accommodation of ladies and gentlemen, to whom the bustle of the ware-room may been strongly and frequently made to confine these rooms to the purposes of a subscription library, a plan which would no doubt be highly lucrative to the proprietors; but the disappointment it must necessarily occasion to a very large portion of the public, has determined them to continue the establishment precisely on that free plan on which it was at first formed.

In the center of the ware room is a dome terminating by a raised cupola, throwing light into the galleries beneath, four in number, which are filled with books both within and without, the books being classed according to their various subjects, and alphabetically arranged.

It is computed that not less than a million of volumes are displayed to view in this immense building, and when it is observed with what facility the demands of each enquirer are satisfied, it is matter of astonishment that so large a collection can be so simplified and regulated.
The book selling business is here carried on its most extended and varied branches, viz. the purchase and publication of manuscripts – the purchase of libraries – and the sale of all kinds of new and old books, both wholesale and retail – printing, bookbinding, &c. The number of persons employed on this establishment as clerks, printers, and binders, always exceed an hundred; and in times of a free continental intercourse, has been nearly double, the stock having been formed on an extended scale, with a view to the supply of the American and other foreign markets.

The vast quantity of books circulated by means of this emporium, and the dissemination of literature promoted thereby, may be judged from the circumstance of no less a quantity than six thousand copies of the Spectator, and the like number of the works of Shakespeare and of Sterne, forming in the whole 150,000 volumes, having been printed by this house in one uniform impression, and actually sold within the soak of six years, at the average low price to the public of little more than on shilling per volume, independent of a variety of other editions of the same works.

It may be in the recollection of many of our readers, that this establishment awes its origin to its former proprietor, Mr. James Lackington, a man of singular character, who, without the aid of a regular education, by the mere force of natural talents, strict principles of honor, and indefatigable industry, raised himself from a station of obscurity to that of independence. He retired some years since, leaving the business to his relative and assistants, who had for many years materially assisted in bringing it to its present state of perfection, and who are too well assured of the value of his precepts to depart from a system which has raised them to so enviable a distinction.

The circumstances attending the origin and progressive increase of this establishment, have been detailed by Mr. James Lackington, with no less interest than fidelity, in the Memoirs of his own Life, a work which has passed through many editions, and which certainly contains much interesting information on literary subjects, combined with a full account of the author´s singularly fortunate career.

The annual sale of books at this repository almost exceeds calculation; which indeed cannot at all be wondered at, when the infinite variety of the collection is considered, combining, as it does, books in every language and department of literature and of science, both new and second-hand, from the unique article of costly value to the lowest priced school-book. Hither all classes of persons resort to make their purchases – the merchant for his exports – the learned for the object of their several studies – the collector of rare books to obtain articles which cannot elsewhere be found – the country trader with his wholesale orders – the schoolmaster for the half-yearly supply of his seminary – and the public at large for the casual purchase oaf whatever may arrest their attention, or interest their curiosity.

The annual publication and extended circulation of catalogues, has tended to make the establishment known throughout the civilized world; and the observation of all strangers nd foreigners, who seldom fail to regard the Temple of the Muses as one of those objects which grace and distinguish the British metropolis.