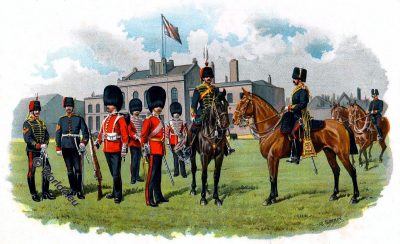 The headquarters of the HAC is the Armoury House in the City of London. There is also a museum, the Honorable Artillery Company Museum and an archive of the history of the regiment and militia in London.

The name does not refer to today’s artillery. During the regimental founding, artillery referred to any weapon thrown or shot.

The regiment took over the role of the Salus of the Tower of London after the regular artillery regiment of the Tower was dissolved in 1924. The salut is fired at the queen’s birthday and on state visits. It has also been one of the few regiments of the British Army since the 17th century, which is allowed to march through the City of London with drums, pinned bayonets and presented flags.

Captain-General of Unity is Queen Elizabeth II. The regimental chapel is in the church St Botolph without Bishopsgate.

According to today’s nomenclature, the HAC was a pure infantry unit during the first 250 years of its existence. Members of the HAC migrated to North America and founded the Honorable Artillery Company of Massachusetts in 1638, the oldest military unit in North America.