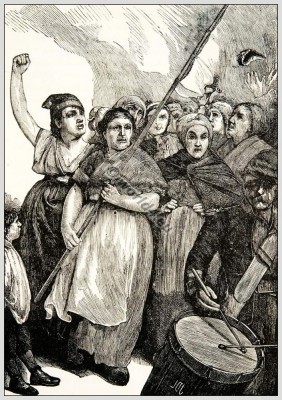 During the Paris Commune, the first feminist mass organization was created, the “Union des Femmes pour la défense de Paris et les soins aux blessés” (The Union of Women for the Defense of Paris and Aid to the Wounded). The organization included 160 different groups and initiatives and had 1,800 members, including Elisabeth Dmitrieff, Anna Jaclard, André Léo, as well as the leading women of the Paris International, Natalie Lemel. “We have come to the supreme moment, when we must be able to die for our Nation. No more weakness! No more uncertainty! All women to arms! All women to duty! Versailles must be wiped out!”, words by Natalie Lemel. 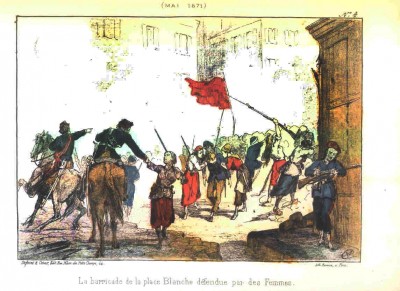 The barricade at the White Place, defended by the women.

The women demanded and received in such a short time the right to work and equal pay as men and fought for more rights, such as equality, legitimate and illegitimate children, and the secularization of education and health care facilities. Women like Louise Michel fought on the barricades.

Especially the most important socialists and feminists in the city refused to join the Union: Sophie Poirier, Beatrix Excoffon, Anna Jaclard, Paule Minck, Marguerite Tinayre – and especially Louise Michel and André Léo. They had all already through public lectures, organizing demonstrations, newspaper articles and pamphlets acquired a certain reputation in Paris. Their “resistance committee of Montmartre” can be interpreted as a counter initiative to the Union des Femmes. One of these women, probably Marguerite Tinayre, wrote in a letter to a friend later: “You might remember that I’ve talked to a woman meeting where I was with André Léo … and we have protested on behalf of the family against all the follies of Mme Dmitrieff.”  (Source Edith Thomas)

There were decrees concerning the retroactive adoption of overdue rent, the return of pledged goods, adopt the prohibition of night work for bakers and for the transfer of factories abandoned by their owners into public ownership. With these measures, the Paris Commune drew the hatred of the government and property owners on it. Accordingly, this social experiment was brutally put down. 30,000 people fell victim to the brutal enraged troops of the French Government within one week to the victims than those on 21 May 1871 invaded Paris.

Karl Marx saw in it “the political form at last discovered under which the economic emancipation of labor could take place.” It was for him, “essentially a working class government, the result of the struggle of the producing against the appropriating class.”