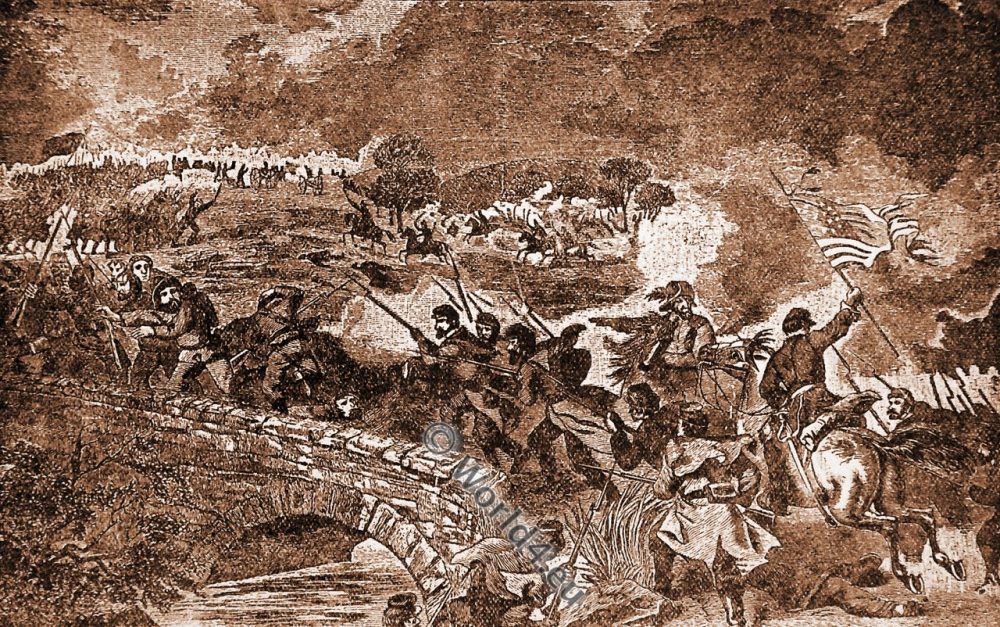 The 11th New York Infantry Regiment (also known as First New York Fire Zouaves, Ellsworth’s Zouaves and U.S. National Guards) – represented one of the infantry regiments of the Army of the Union during the American Civil War, known for its unusual dress and drill style, by Colonel Elmer E. Ellsworth, a personal friend of U.S. President Abraham Lincoln. The regiment was recruited for a period of 2 years of service and was disbanded in June 2, 1862. The regiment took part only in the First Battle of Bull Run in July 1861.

The regiment was formed in New York City of the members of the fire brigade. Colonel Elmer Ellsworth became the first commander. Ellsworth was a fan of the Zouaves tactics, light infantry open-order formations, and was known for the fact that he already formed the New York Zouave militia.

On May 24th the 11th New York Infantry Regiment was involved for the occupation of Arlington Heights and the capture of Alexandria. On that day, Colonel Ellsworth was shot when removing the Confederate flag atop the “Marshall House Hotel”.

July 16th, the regiment was included in the team of Orlando B. Willcox (Maj. Gen. Samuel P. Heintzelman’s division) as part of the Army of Northeast Virginia.

On July 21, the regiment took part in the first battle of Bull Run, where it was assigned to cover two batteries of cannon on the Federal right flank led by Captains Charles Griffin and James B. Ricketts. The gap regiment came under the attack of the 33rd regiment of Virginia, and the cavalry of Stuart, and was converted into a rout. In this battle, the regiment lost 2 officers and 34 privates killed, 73 people injured and 68 people missing. Colonel Farah received a severe wound from which he died on 14 August.

Zuaven called themselves the members of historical infantry units. The name goes back to the Kabyl tribe of the Zuauas in the Zuaua district (Zuavia) in the province of Constantine in Algeria, which, during the Ottoman Empire, had already made mercenary groups famous for their bravery.