The Temple Mount in the Old City of Jerusalem. Plans and sections

VIEW OF THE SOUTH GATE OF THE HARAM ES-SHERIF, (BAB EL-HULDAH.)

The Temple Mount (Arabic الحرم الشريف al-haram ash-scharif ‘the noble sanctuary’) is a hill in the southeast of the Old City of Jerusalem, above the Kidron Valley. On its summit is an artificial plateau of about 14 ha, in the centre of which stood the Herodian Temple, a successor building to the post-exilic Jewish Temple, which in turn was built on the foundations of Solomon’s Temple. The Dome of the Rock has stood here since the 7th century AD. On the southern side of the Esplanade is the al-Aqsā Mosque. The Temple Mount is one of the most controversial holy places in the world.

The Temple Mount in Jerusalem can be entered through eleven gates. In addition, there are six locked gates.

The Gates of Huldah (Hebrew: שערי חולדה, Sha’arei Huldah) were gates leading to the Temple compound in Jerusalem in the Hasmonean period, named in the Mishnah. The term is now used for the remains of two later sets of gates, the Triple Gate and the Double Gate, built as part of the extension of the Temple Mount initiated by Herod.

Both sets of gates were part of the South Wall that bordered the Temple Mount esplanade. From the gates there was access to underground ramps with vaulted ceilings, which led up to the esplanade. They were bricked up in the Middle Ages.

WESTERN VIEW OF AL-AKSA, NEAR THE SOUTHWESTERN ANGLE.

Note:  A Chinaman. Chinese Mandarin and the dog as a sign of dignity.

WAILING·PLACE OF THE JEWS. A PORTION OF THE ANCIENT WALL OF THE TEMPLE ENCLOSURE.

This Wall is of the date of Herod the Great, and is the best specimen of the Masonry of that period to be found in Jerusalem. The Jews come to pray and weep before it every Friday.

FACADE OF THE MOSQUE AL-AKSA.

SECTION OF THE MOSQUE OF EL-AKSA, AND OF ITS SUBSTRUCTIONS.

A. B. C. Capitals found by Pierotti,
D. Wooden Roof of the Mosque el-Aksa.
E. Wall of the time of Justinian.
F. Aperture in the Wall leading to Subterranean Passage on the West.
G. Walled-up Door.
H. Monolith.
L. Side-doors of the Mosque.
M. Tombs of Aaron’s Sons, according to Mohammedan traditions.

a. Vaulted underground Works, originally Jewish building. Restoration by Justinian (as shewn by Rev. G. Williams).
b. Pillars of the time of Justinian.
c. Wall erected by Justinian.
f Monolith.

Note:  View of Petra from the top of the Nabataean Theatre.

SECTION OF KUBBET ES-SAKHARAH – VIEW OF THE INTERIOR OF THE GOLDEN GATE.

FOUR MOSAICS IN THE INTERIOR OF KUBBET ES-SAKHARAH, AND MOSQUE AL-AQSA.

DETAILS OF THE CAPITAL OF THE MONOLITH IN THE UNDERGROUND WORKS OF AL-AKSA; OF THE ORNAMENTATION OF THE GOLDEN GATE; AND OF THE SIX CAPITALS WHICH CROWN THE COLUMNS OF THE MOSQUES.

PLAN AND SECTION OF LAND SURROUNDING THE CHUROH OF THE RESURRECTION AND THE HOSPITAL OF THE KNIGHTS OF S. JOHN. 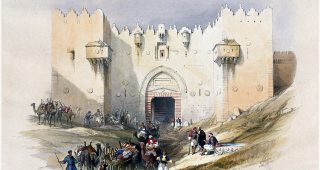 View of the Damascus Gate, leading into Jerusalem.

The Damascus Gate or Bab al-Amud, is one of the main gates and the largest city gate of the Old…

Jerusalem. Plan of the Church of the Resurrection and the Holy Sepulchre.

The Cenacle and the Tomb of David of Mount Sion at Jerusalem.

Tomb of the Prophets. Tomb of Lazarus at Bethany.