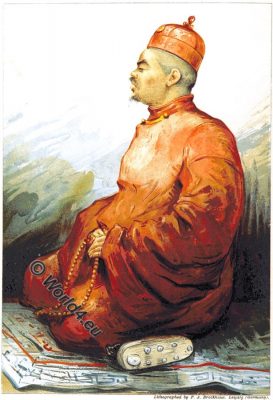 … WE now proceeded in a North-westerly direction, and, once clear of the sacred Yutzang province, our guard behaved with rather less cruelty. With the little money the Pombo had permitted me to keep we were allowed to purchase food enough to provide us with more frequent meals, and, while we ate, the soldiers removed our handcuffs, which they temporarily placed round our ankles. Thus, with utensils lent us by our guard, we were able to cook some food; and, although we had to serve it on flat stones instead of dishes, it seemed indeed delicious.

We crossed over our former track, and then followed it almost in a parallel line, but some miles North of it, along an undulating, clayey plateau, thus avoiding the marshy plain which we had found so troublesome to cross on our journey out. We found large numbers of black tents here and there, and one night, when we were encamped by some small lakes, we were permitted to purchase a goat. A soldier, a good fellow who had been very friendly to us, selected a fine fat one for us, and we were looking forward with pleasure to a solid meal, when we found to our dismay that we had no means of despatching the animal. We could not behead it, as the Tibetans would not trust us with a knife or sword, and the Tibetans themselves refused to kill the animal for us in any other way. Eventually our soldier friend allowed his scruples to be overcome by the payment of a rupee, and proceeded to kill the animal in a most cruel fashion. He tied its legs together, and, having stuffed the nostrils with mud, he held the poor beast’s mouth closed with one hand until it was suffocated. The soldier during the performance revolved his prayer-wheel with his free hand, praying fervently all the while.

We found ourselves at last in the plain, where a Tarjum’s encampment of some two hundred tents was to be seen, and here we remained one night. There was a large assemblage of Lamas and soldiers. In the middle of the night we were suddenly and roughly roused from sleep, and made to move our camp about a mile or so from the settlement; and, early in the morning, having crossed the large stream, we proceeded in a South-westerly direction, reaching the encampment of the Tokchim Tarjum the same night. Here we were met by the officers who had on a previous occasion brought us gifts, and whom we had routed with all their soldiers when they threatened us.

This time they behaved very decently, the oldest of them showing us every civility, and professing great admiration for our courage in persevering against such heavy odds. The old gentleman did all he could to make us comfortable, and even called up two strolling musicians for our amusement. One man wore a peculiar four-cornered head-dress made of skin. He played with a bow on a two-stringed instrument, while his companion, a child, danced and went through certain clumsy contortions, going round every few minutes with his tongue thrust out to beg for tsamba from the audience. The Tibetans are very charitable towards beggars, and not only on this, but on other occasions, I noticed that they seldom refused, no matter however small their donations might be, to give tsamba or pieces of butter or chura to the mendicants. The older musician had a square club passed through his girdle, and at intervals he laid down his instrument, and, using the club as a sword, gave an imitation of a martial dance, exactly like the one I have described as performed by the Shokas. Every now and then, too, he applied it to the boy’s back and head, to inspire him with fresh vigour, and this generally drew roars of laughter from the audience.

‘The Tokchim Tarjum’, 1898. Plate taken from In The Forbidden Land (an account of a journey in Tibet, capture by the Tibetan authorities, imprisonment, torture, and ultimate release), volume II, by Arnold Henry Savage Landor, published by William Heinemann (London, 1898).